Revell models has had a busy week. Having already revealed their new Master Series of models, they also sent us pictures of their next assortment of models: SnapTite Max. These are more complicated than their first series of SnapTite models and are aimed at a slightly more experienced model builder.

We really like this line. It's a nice compromise between the ease of assembly found on the first series of SnapTite models, but with more detail. Additionally, it doesn't require the time or expense of the Master Series of models. 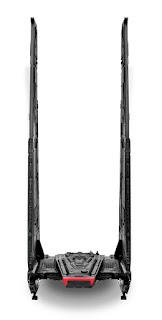 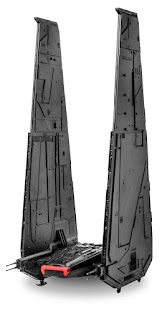 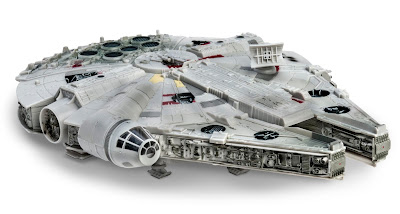 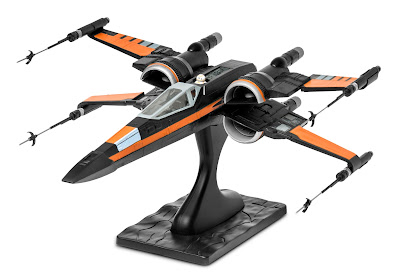 For Intermediate Builders:
The five new SnapTite® Max™ models replicating the vehicles in Episode VII of Star Wars enable builders ages 8+ to construct detailed, real-world renditions of the Millennium Falcon™, Poe’s X-Wing Fighter™, Resistance X-Wing Fighter™, First Order Special Forces Tie Fighter™ and Kylo Ren’s Command Shuttle™ from the new movie. Each Skill Level 2 kit features 39 to 85 pre-decorated, snap-together pieces that can be assembled in an hour with no need for paint or glue while providing a more challenging project as compared to the SnapTite Build & Play line.

The finished SnapTite Max models are significantly larger and more detailed than the SnapTite® Build & Play™ kits designed for younger children, thanks to higher piece counts that allow more details to be molded into the plastic. Assembled sizes range from 10” x 8.8” for the X-Wing Fighters to 14” x 10” for the Millennium Falcon™. All five also have moving parts like open/close cockpit hatches, removable landing gear and wings that open into attack mode – to better replicate the epic battles taking place in a galaxy far, far away.

Availability:
The new SnapTite Max kits are available at Hobby Lobby stores and online. Prices range from $29.99 to $69.99.
Posted by Tommy Garvey at 10:14 AM