Star Wars at the Movies: One Year Old Today 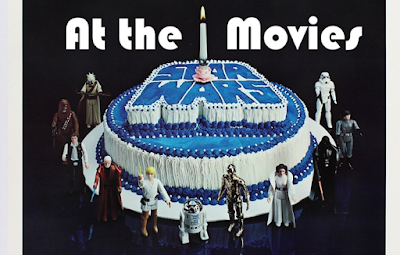 Regardless of what you think of The Force Awakens, I think we can all agree on one thing: it won't be in theaters a year from now. Within a few months you'll be watching it on your flat screen while eating C-3PO popcorn and saying something like, "Maybe I wasted my money seeing it in the theater 600 times."

But back in 1977 Star Wars played in some theaters for a full year, all the while racking up box office returns and padding the profits of the Kenner toy company. So important were the toys within the Star Wars ecosystem that the theatrical poster issued to celebrate the one-year anniversary of the movie's release featured Kenner action figures front and center. As far as I know, this is the only time a movie poster has functioned as a de facto toy advertisement. 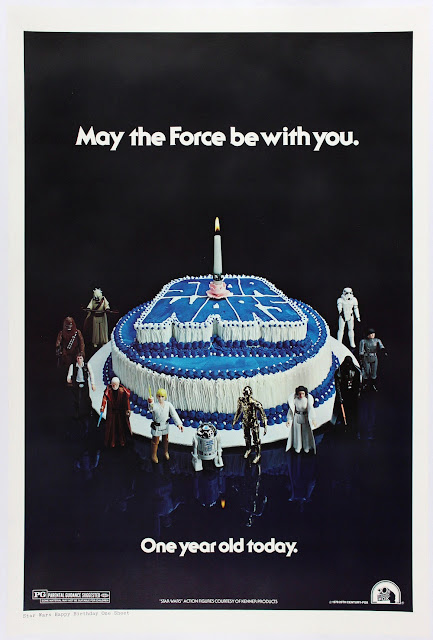 The poster was printed by Gore Graphics, the company that printed a lot of the posters created for movie studios and the National Screen Service during the '70s and '80s.

Gore also produced ad slicks like the ones you see pictured below. These were sent alongside posters in order to provide theaters with graphical material for use in local print advertising. These slicks are very similar to the "repro art" material that Kenner sent to retailers for the creation of toy advertisements. (I examined some of this material back here.)


Once the theater employees were in possession of the slicks, they would clip out the appropriate graphic, modify it with text showing theater name, location, and show times, and purchase space for it in the local paper. Because papers priced ads according to the number of columns (width) and lines (height) they would occupy, the slicks are proportioned in different ways. The largest, comprising six full columns and 1200 lines, is equivalent to a full-page ad.


As you can probably tell, the graphic used on the slick is not an exact reproduction of the image on the poster. The background of the slick is white rather than black, and the colors of the cake differ between the two images.


There are several additional, more subtle differences. My guess is that the image on the slick was created via a combination of photo montage and airbrushing. In other words, it's not a photograph, but rather something assembled by an art department in a manner that ensured it would display well in small, black-and-white reproductions.

Collectors often comment on the absence of the Jawa figure on the poster: Of the first 12 figures issued by Kenner, the Jawa is the only one not represented. While it's tempting to ascribe this absence to the change from a vinyl to a cloth cape that notoriously affected the Jawa, I think it's more likely that the figure's scale and dark coloration simply didn't lend themselves to a balanced composition.


Clearly, the designers of the poster reserved the space at the front of the cake for the two droids, Luke, and Leia. The natural space for the Jawa was opposite the Sandperson on the right side of the cake, a distant position that would have rendered it little more than a dark blob on the poster.

Of course, it's also possible the Jawa simply called out sick on the day the photo was taken. 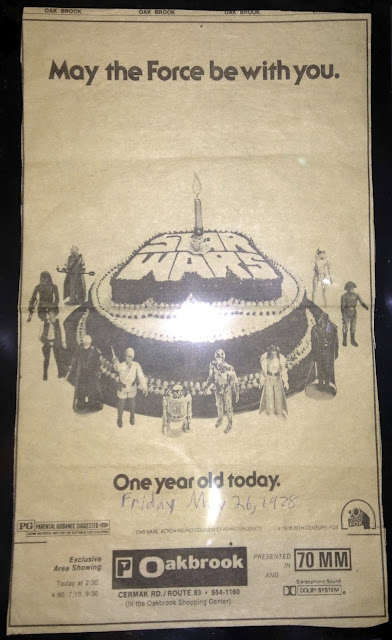 Above you see an example of an actual newspaper ad created using these slicks. I believe it derives from one of the four-column examples, though the image has been downscaled a bit, and the arrangement of some of the textual elements appears to have been tweaked. The ad is for a theater located at the Oakbrook Shopping Center in Illinois. 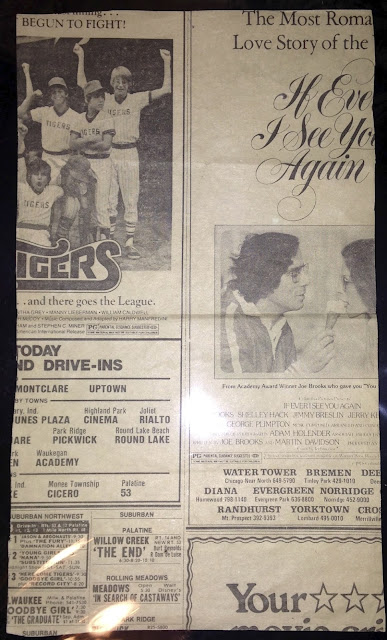 Here's the reverse of the ad, which almost succeeds in persuading me that it derives from an alternate universe. What is this strange film featuring what I can only assume are the Bad News Tigers? And though I know a fair bit about movies, I've never heard of If Ever I See You Again, which apparently utilized the talents of George Plimpton and featured an erotically charged ice cream cone.

Fortunately, the smaller movie notices mention Brian De Palma's The Fury and a revival of Jason and the Argonauts. We're in the correct universe. Phew.

In "The Star Wars Poster Book," which should occupy a spot in the library of every serious collector, Steve Sansweet and Pete Vilmur explain that the "birthday" poster was "distributed to theaters still showing the film a year after its opening." It's never been clear to me if the "year" in this sentence was calculated from the day on which the specific theater began showing the movie, or from the date on which Star Wars opened in any theater.

The theater in the Oakbrook Shopping Center is not on this list of approximately 40 venues that showed Star Wars on that Memorial Day weekend in 1977. However, several other Chicago-area theaters are on the list, and the Oakbrook location does appear to have been outfitted to show 70mm films with Dolby stereophonic sound, which was a prerequisite for screening Star Wars on its opening weekend.

If anyone knows if Star Wars played at this location between May 25 and 27, 1977, please let us know in the comments. 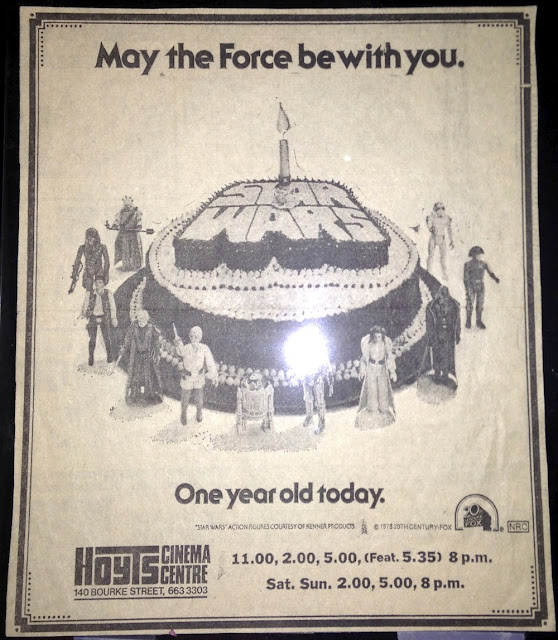 Here's another example of a "one year old today" ad from an old newspaper. This one was modified heavily from the above slicks; you can even see lines surrounding the main image, indicating that it derives from a mock-up created from elements that were clipped and repositioned. Also, the print quality is quite poor, suggesting it is not a first-generation reproduction. 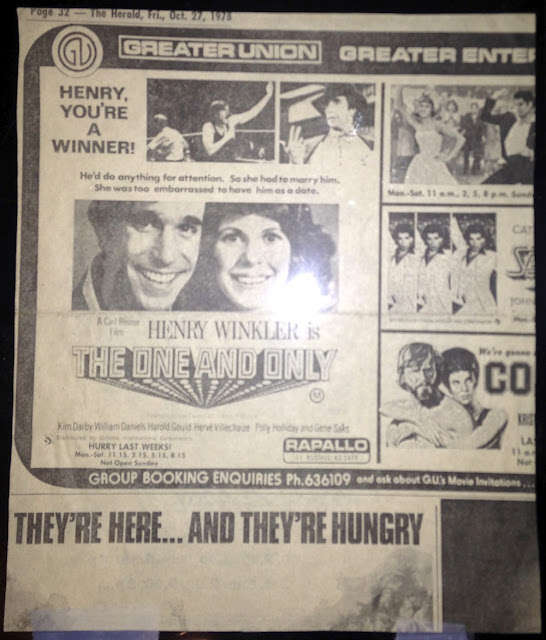 My favorite thing about the reverse of the ad, aside from the graphic for Convoy, Sam Peckinpah's epic of big-rig truckin' and lovin' on the open highway, is the tagline for the Henry Wrinkler vehicle The One and Only. It's so puzzling that it almost qualifies as a koan. It reads:


He'd do anything for attention. So she had to marry him. She was too embarrassed to have him as a date.

Read it a few times. Tell me those aren't the weirdest three sentences your brain has ever tried to process. She married him to avoid the embarrassment of dating him?

Okay, having gotten that out of the way, we can discuss the date. No, not Winkler's embarrassment date, the release date of the movie. The top of the page reveals that the ad appeared in the paper on October 27, 1978.

"Ah," you're saying to yourself, "this theater must have gotten the movie late!"

You see the Hoyts Cinema Centre at 140 Bourke Street wasn't a U.S. theater; it was an Australian theater, located in Melbourne. And Australians didn't get to see Star Wars until it had been out in the States for several months.

Sure enough, IMDb reveals that Star Wars hit Australia on October 27, 1977, exactly one year prior to the date of our ad.

The Cinema Centre was a luxurious movie palace designed with a modernist aesthetic. You can read more about the complex here and here, and you can peruse some of architect Peter Muller's original drawings and models here.

More pertinent to the present topic is the comment of "Snub" in the discussion about the Cinema Centre found here. In it he says, "My favourite memory of the place, along with thousands of others, is the initial engagement of Star Wars that ran for over a year in the building."

There you have it: Firsthand confirmation that Star Wars played in the Cinema Centre for a full year.

Sadly, the Cinema Centre is no more, having been boarded up in the '00s.

One question remains: Was the "birthday" poster ever used in Australia? I would guess not, but I'd love to be proven wrong.