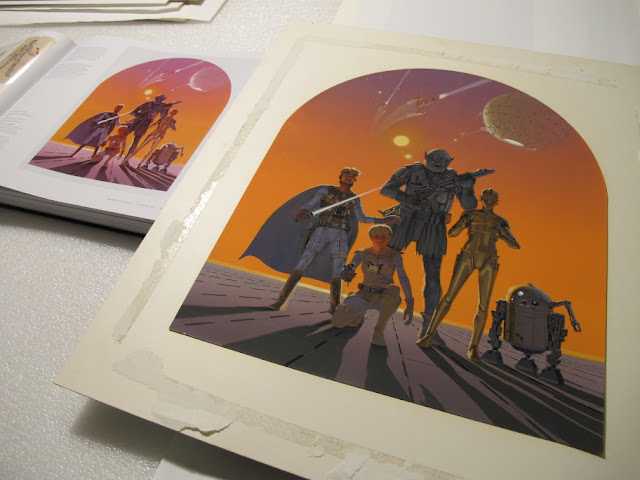 We’re delighted to have Brandon Alinger – one of the co-authors of the recently published (and literally monolithic) book Star Wars Art: Ralph McQuarrie – join us to share some insights about the ambitious undertaking of compiling and presenting the legacy of one of the franchise’s most prolific creative forces.

A collector in his own right, Alinger also serves as Chief Operations Officer of Prop Store's United States operation in Los Angeles.

Brandon Alinger: The project really began with J.W. Rinzler, who is well known to Star Wars fans for the wonderful “Making Of” books he did on the three original films. Rinzler wanted to do the definitive McQuarrie book for some time, as did Abrams, the publisher. After I wrote Star Wars Costumes: The Original Trilogy in 2014, Rinzler told me the next archival title on the slate was the Ralph McQuarrie book, and it was mine if I wanted it.

BA: I knew it would be a great project but also a large workload. David Mandel and I were friends for many years and I knew he was a Ralph McQuarrie enthusiast. David was long-time friends with Wade Lageose and suggested pulling Wade in as well, as Wade was also a McQuarrie enthusiast and had the added benefit of having known Ralph for more than ten years. Wade spent a lot of time with Ralph in the 90s and early 2000s. Each of the three of us brought a unique angle and skill set to the project. 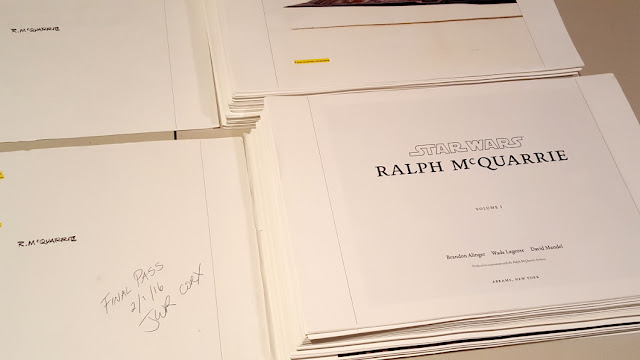 SD: The scope of the book is sprawling, to put it mildly! Was the goal always to be completely comprehensive, or did that emerge as the research process progressed?

BA: That was part of the brief from the beginning, and as authors that was really the carrot that drew us to the project. McQuarrie’s work has been published in the past, going all the way back to The Art of Star Wars which was released after the original film. There have been other nice books done on Ralph’s work in the past, and some which had his direct input. In the absence of his direct input, we wanted our book to be as comprehensive as possible – both in the artwork shown and the story told.

SD: The book's chronological structure presents an approach unlike previous publications featuring McQuarrie's Star Wars work. How was the organization of the book developed?

BA: We looked at several possible methodologies for the book; the most obvious approach would have been to present the art in story order – an order very familiar to many readers. Rinzler really pushed the idea of laying the art out chronologically, so the reader could follow Ralph’s journey. In doing so the book became a visual history of these films, and a great “Making Of” companion, with a very specific scope. Beyond the beautiful artwork, there’s a real story here about the development of these landmark films. 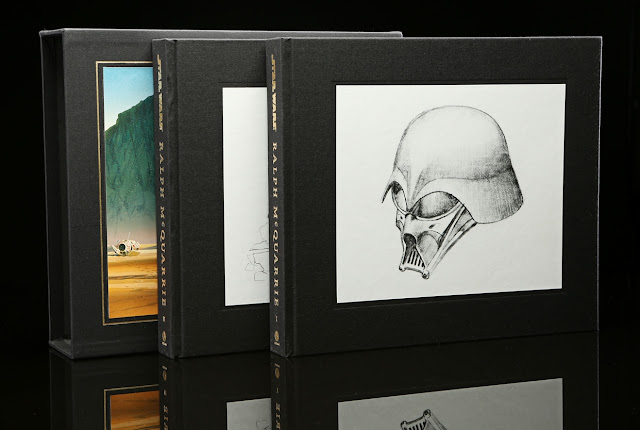 SD: One of the most fascinating aspects of the book is its ability to place each work in proper context, with assemblages of each iteration of a concept or illustration culminating in the final work that many fans are familiar with. Did this method pose any particular challenges?

BA: It was challenging because the information available to us was imperfect. We had certain key resources – like McQuarrie’s day calendars from the period – which outlined many of the key dates, such as the production paintings. But not every piece was dated, especially when we got into the sketches. So we organized the paintings as the key running narrative and tied the related art to those in what we felt was the most likely chronological order based on the clues available. It was real detective work at times – cross referencing different data sources to interpret a possible timeframe and place it on our master timeline.

SD: If you were to choose personal highlights from each of the three films, what would they be?

BA: For Star Wars, I’ll say the first sketches of R2-D2. There were a couple of different concepts but each got no more than a single sketch, and then he hit on what was very close to the final version. 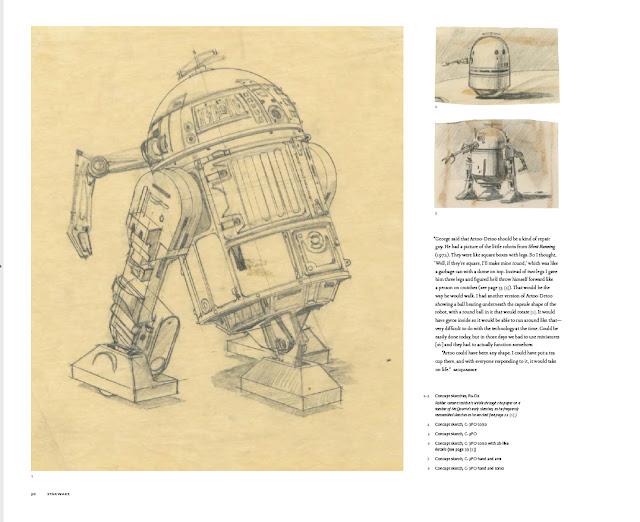 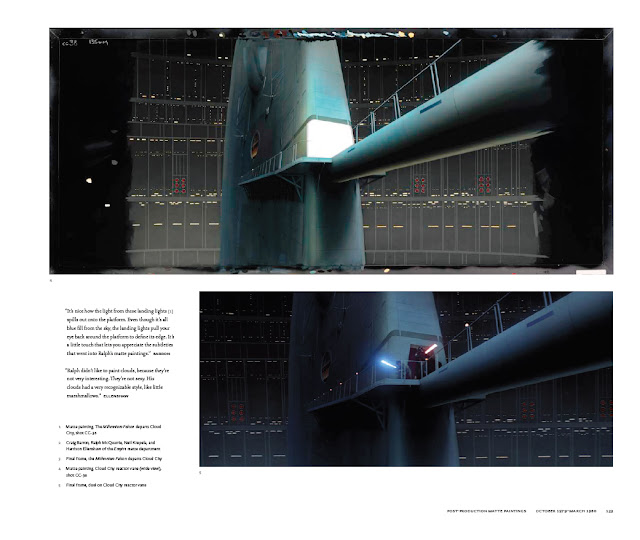 BA: One particularly beautiful Jedi painting shows Luke and Vader entering a rather gothic-looking Emperor’s castle. It’s very different to where they ultimately went with that set, but I love the image – the idea of Vader and Luke going to see the Emperor, which is really the conclusion of the Star Wars saga – especially at that time.

SD: Getting back to what it took to put this together – where did the research process begin, and how did it unfold?

BA: The project started with a trip to Skywalker Ranch with Jonathan Rinzler and Eric Klopfer, the publisher at Abrams. Getting to work at the Ranch is one of the real perks of a project like this. We spent three days going through the flat files and making an initial catalog of what was there, physically, in the Ranch Archives collection. From there we progressed to other key resources, such as Lucasfilm’s digital image library and relevant interviews in the Ranch library. And then we branched out into external sources – we collaborated with the Ralph McQuarrie Archives and with many of McQuarrie’s colleagues from the period.


SD: As someone with a background in libraries and archives myself, I can only imagine what an incredible experience that must have been! Regarding the interviews, the book contains a multitude of period anecdotes from McQuarrie and those that knew and worked with him. What were the most fruitful sources for these stories?

BA: The key source were archival interviews that the librarians at the Ranch located for us. Fortunately, we aren’t the first ones to take an interest in McQuarrie’s work – far from it! Lucasfilm’s publishing department in the late 70s and early 80s utilized McQuarrie’s paintings and sketches in the “Art Of” books as well as the Ralph McQuarrie Portfolios that they put out. They conducted fairly extensive interviews with Ralph at the time where he discussed each piece in great detail. Other interviews were done for the Star Wars Fan Club at the time, or done later as part of a Lucasfilm history project. In the absence of Ralph himself, the best information definitely came from these – the period interviews are wonderful because it’s so fresh. We conducted more than 30 new interviews ourselves which also yielded some wonderful stories and quotes, but the key source was the archival McQuarrie interviews.


SD: Of the new interviews with McQuarrie's cohorts that were conducted specifically for this book, which were the most enlightening or memorable?

BA: Craig Barron and Harrison Ellenshaw, who both spent a large amount of time with McQuarrie, were extremely helpful to us. They visited the Ranch and looked at matte paintings and other artwork and had many wonderful insights and stories. Ralph’s fellow designers Joe Johnston and Nilo Rodis-Jamero gave us some great information, and helped identify whether certain pieces were his or not. We had great interviews with Gary Kurtz, with Howard Kazanjian – with many people really.


SD: With more than 1,000 pieces being newly scanned or photographed exclusively for this project and many others being published for the first time, how did the book's production process evolve?

BA: Fortunately, Abrams was able to hire a full-time scanner for the project. Steve Yamane spent several months scanning every piece of artwork that would fit on the scanner. Those that didn’t fit were shot by an art photographer named Joe McDonald, who also shot the matte paintings. All of this was in collaboration with the archivists at the Ranch archives – Laela French, Kathy Smeaton, Joanee Honour, and Madlyn Burkert. It takes a village... 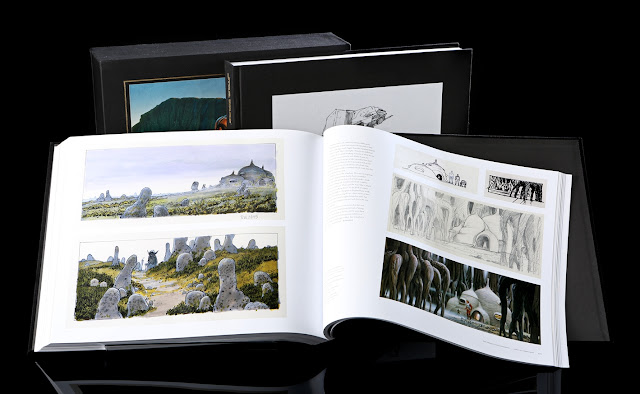 SD: What new visual discoveries were the most eye-opening for the authors?

BA: Initially the most eye-opening thing was just seeing the artwork in person. It’s cliché, but there’s nothing like seeing it in person – though we hope this book is the next best thing.

I personally had a lot of fun going through the early drafts of the first film and comparing Ralph’s sketches to the text. It was apparent he was working directly from it, and based on the action being drawn you could date a sketch to the second draft or the third draft, for example. We included those script excerpts so readers can see the inspiration as well.

SD: The collective body of work contained in the book reveals the wide-reaching impact McQuarrie had on the films' entire production and promotional process in ways that fans may not be as aware of. Was this an intended objective from the start?

BA: Oh yeah! The goal was to spread awareness on McQuarrie’s Star Wars work. I think the film work is undeniably the most significant, but all the work is wonderful.

SD: With many artifacts from the original films' production (from props and costumes to artwork) having made their way to the collectors' market over the years, what role did the Star Wars collecting community play in publishing the book?

BA: We reached out to a number of private sources that had McQuarrie pieces, and fortunately everyone was agreeable to helping out and contributing scans to the book. There were some really wonderful pieces in private hands that the book would not have been complete without, so that was nice.


SD: The book describes itself as being 40 years in the making, which is an apt definition given its historical reconstruction of McQuarrie's Star Wars career. His work in the years beyond the three original films is given ample coverage as well. What do the authors envision as the ultimate takeaway for readers, be they casual fans, collectors, or hard and true Star Wars enthusiasts? 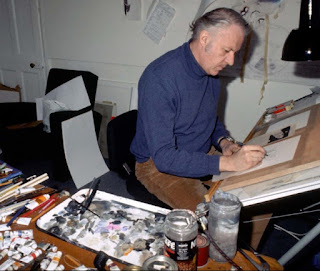 BA: I suppose each reader will have their own “ultimate takeaway.” For me, the ultimate takeaway is that McQuarrie was almost the hand of George Lucas – drawing everything Lucas was thinking. He did not do everything. Major contributions were made from other people – Joe Johnston, Colin Cantwell, John Barry, Nilo Rodis-Jamero, John Mollo – lots of folks. But Ralph did an awful lot on all three films, and perhaps most significantly, he established the look of the characters. When you see the earliest sketches of Vader, Threepio and Artoo and you read that they were done in a single day...it’s quite remarkable. George described them, he drew them, and they were born, so to speak. Amazing.

Posted by Stephen Danley at 8:05 AM