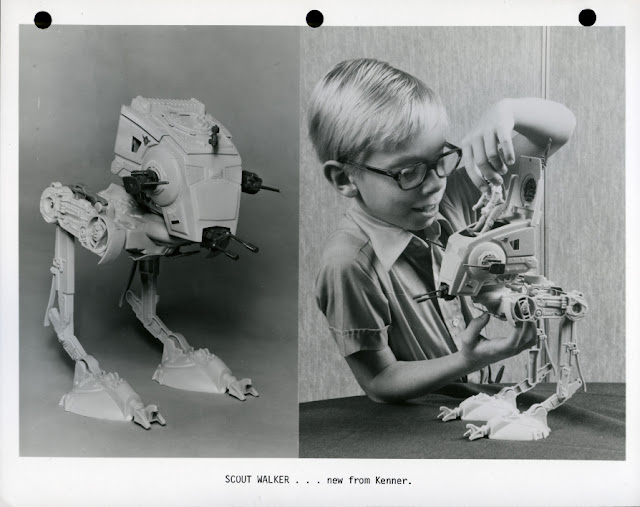 I've always thought the kid featured in the photograph above was the vintage Kenner Star Wars equivalent of Ralphie from A Christmas Story, with similar Christmas dreams and aspirations that were fulfilled just the same (hopefully with spectacles intact). Stills such as this have turned up from different types of sources, including newspaper archives and groups of catalog-related items, indicating that they may have been sent to retailers and wholesalers in addition to being included in press releases. In any case, it's a fun image featuring one of the more endearing Kenner Kids that may not be as familiar as others from the earlier Star Wars products. 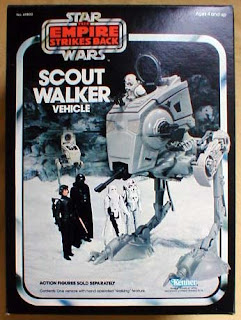 The Scout Walker was initially released in 1982 as part of the Empire Strikes Back line following an extremely brief appearance in the film during the Battle of Hoth. When did a passing glance onscreen ever eliminate a cool character or vehicle from toy consideration? Well, describing Prune Face as "cool" is slightly more questionable, but I digress. Featuring swivel side cannons with clicking "laser machine gun sounds" (I don't recall ever seeing the term "machine gun" associated with a Star Wars toy) and perhaps most importantly, the ability to "stand unassisted," the Scout Walker (or AT-ST) would go on to pay a prominent role in Return of the Jedi, providing even greater returns on Kenner's initial investment. I mean, the thing even makes the Vehicle Maintenance Energizer seem awesome in this commercial. What's not to like?

Happy Holidays from the SWCA!


Special thanks to Todd Chamberlain for providing additional background information on Kenner press stills.
Posted by Stephen Danley at 8:09 AM