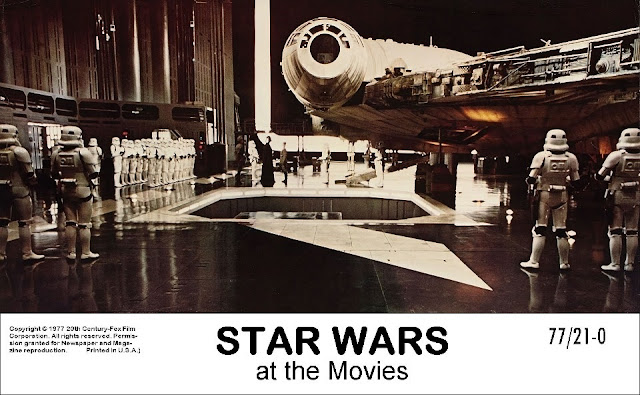 The original theatrical releases of the Star Wars Trilogy took place at the end of an era in movie marketing in the United States. More specifically, the mid 1980s saw the end of the National Screen Service (NSS) as the primary force behind the domestic creation and distribution of film advertising materials. In addition to posters and other related promotional accessories, the NSS was a source of lobby cards for the first three films. Just as the term implies, these small posters were created to be displayed within cinema lobbies and foyers as a means of enticing moviegoers with still images of central characters and key scenes from a film. Their smaller size and and composition as self-contained sets has made them a natural collectible for decades, but they're more or less an obsolete medium absent from the contemporary movie multiplex landscape in America.

Like so many areas of Star Wars collecting, lobby cards for the original films offer massive variety and considerable nuance. This installment of "Star Wars at the Movies" will merely scratch the surface on this surprisingly expansive niche.

The standard U.S. lobby cards for Star Wars will serve as a representative set and beginner's guide to what collectors should keep an eye out for.

Both 11x14" (standard) and 8x10" (mini) lobby card sets were produced, each containing eight unique images. Several printings and related variations exist. NSS-issued sets contain a bottom border with title, studio/distributor, and copyright information along with the NSS code for the film that would serve as a reference number used for other advertising materials the organization generated, including posters. For example, the code for the first printings of the Star Wars lobbies was "77/21-0." Reprints from 1978 after the film was a smash success were subsequently coded "770021." 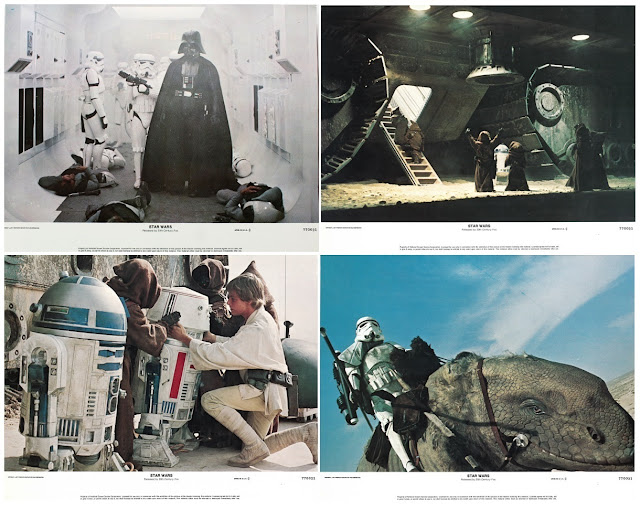 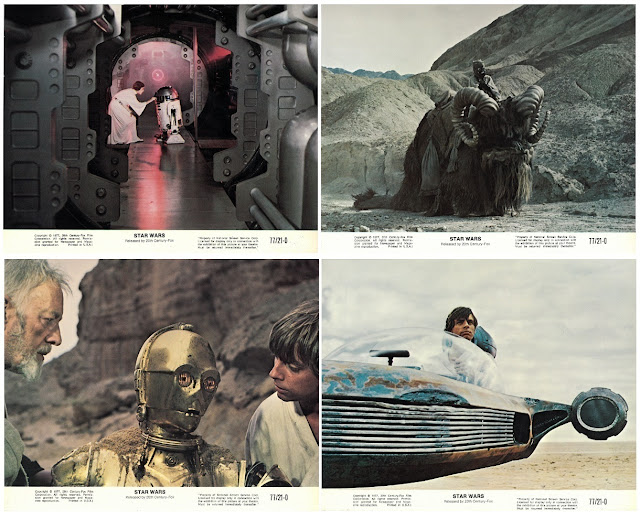 Borderless or "full bleed" versions of both sets lacking NSS information -- most likely printed in-house by the studio -- were also produced. While most sets were typically printed on regular cardstock, sets printed on much thinner, poster-like stock have also been documented.

Larger sized lobby cards, commonly referred to as "photobustas," were released in smaller sets. A set of four 16x20" and two 20x30" full bleed photobustas were produced for Star Wars.

Historically, lobby card sets would often include a title card displaying the name, logo, or poster artwork for the film. One such card was created for Star Wars, though it is less commonly found with extant lobby card sets. Featuring a deep blue color utilized in other early print advertising for the film, the Star Wars title card has been found with original studio-issued, full bleed 11x14" lobby card sets as well as 2nd printing NSS sets. It is believed to have been sent only to theaters that ordered the entire assemblage of lobby cards and photobustas, making it somewhat elusive.

A set of six 12x17" character portraits were printed individually and as part of a roughly 34x37" promotional poster that was apparently included as part of a package with a set of the 8x10s, 11x14s, and 16x20" lobby cards. A small image of the poster displayed at Grauman's Chinese Theatre can be seen here. Darth Vader and the two droids are noticeably missing from the set, which was perhaps due in part to the star power of Alec Guinness and Peter Cushing.

A similar set was also produced for The Empire Strikes Back where R2 and 3PO would finally get their own portrait, though Vader once again didn't make the team. Instead, he was honored with a 20x30" photobusta all his own which depicted his menacing visage amidst a starfield, closely resembling the imagery from the film's advance one sheet teaser poster.

THE EMPIRE STRIKES BACK & RETURN OF THE JEDI (INTERNATIONAL)

Comparable domestic sets in the standard sizes outlined above were also produced for The Empire Strikes Back and Return of the Jedi, but for the sake of diversity, some foreign examples for these two films will provide a glimpse into the larger world of lobby cards outside of the United States.

Italy was a source of some of the most aesthetically striking larger photobustas (or "fotobustas"), with standout sets for each of the three original films. Though they can be classified more as half sheet posters due to their 18x26" size, they essentially embody the characteristics of lobby cards, particularly with the set for The Empire Strikes Back. The Empire set consisted of twelve images from the film framed within a sleek silver border framed by the tagline "Continua La Saga Di 'Guerre Stellari'" and translated title L'Impero Colpisce Ancora.


Lobby cards from Mexico present similar characteristics but certainly have their own distinctive style, with smaller black and white still images from the films set among additional color artwork. For The Empire Strikes Back, the stills are bordered by a striking combination of the domestic Style "B" and Noriyoshi Ohrai's artwork along with the film's credit information and translated title El Imperio Contraataca. 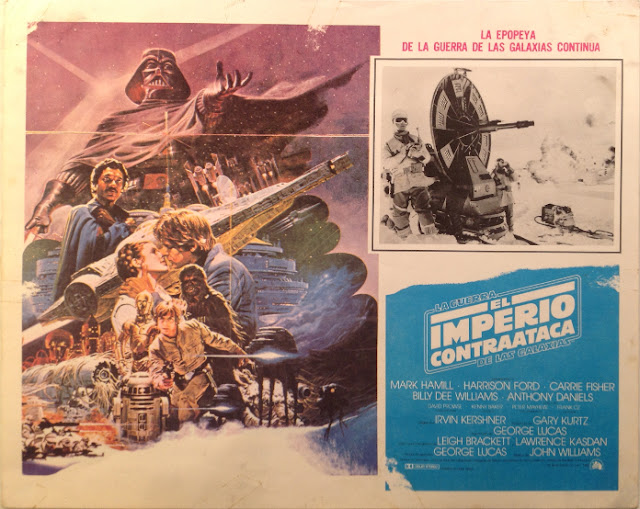 From the Collection of Duncan Jenkins 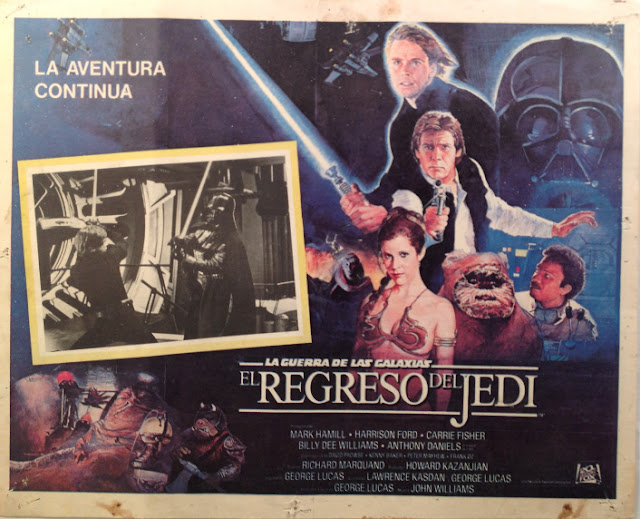 From the Collection of Duncan Jenkins


The following 8x10" lobby cards for Return of the Jedi are interesting in that the film's title logo is in German (Die Rückkehr der Jedi-Ritter), but based on an imprint which reads "Imp. G. DARMON Paris," the cards were actually printed in France, and likely distributed to German-speaking areas in Europe. A similar imprint can be found on German lobby cards for Star Wars and The Empire Strikes Back. In fact, the same sets of images for each of the three films coincide, with the sole distinction being the French or German language of the logo. Similar image sets can be found from other European regions in their respective languages as well. It should be noted that this particular set is missing two cards (the Falcon flying through the innards of the Death Star, and a crane shot of Vader's arrival from the opening of the film). 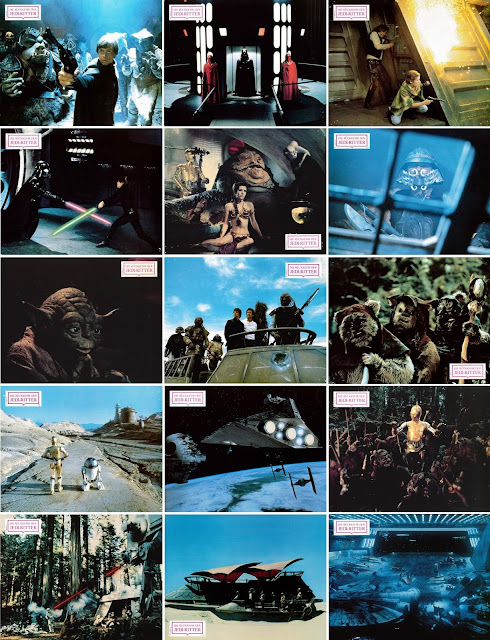 Unfortunately, period photographs of lobby cards in use are quite tough to come by. But, some great images of original Star Wars lobby cards on display at the old Eastwood Theatre in Indianapolis (which ran the film for a staggering 55 weeks!) can be found over at CinemaTreasures.org.


Special thanks to Duncan Jenkins, Todd Chamberlain, and Pete Vilmur for aiding with information for this post.
Posted by Stephen Danley at 11:34 PM