It often seems as though involvement in Star Wars toy collecting is limited to the action figures and related toys.

So focused are some collectors on the action figures, they'll buy 167 versions of the same figure before they'll even look at a toy that doesn't have four or five points of articulation. I mean, why bother with something that no one on Facebook has ever heard of when there might be a Luke out there whose hair is slightly more orange than the 11 orange-hair versions you already have?

Nerdlingers: There's a point at which OCD ceases to sound like the three-letter prefix of a mini-rig title and assumes the characteristics of an actual problem, one that might lead to bankruptcy, social rejection, and life as a wandering hobo. (And if you read "wandering hobo" and thought "here is an opportunity to cosplay as ANH Obi-Wan Kenobi," you've merely confirmed the depth of your problem.)

The predominance of the figure-centric approach to collecting has resulted in MPC's line of Star Wars model kits being virtually ignored by contemporary collectors. I think this is unfortunate. As I hope to show in this series of articles, MPC put out a terrific range of Star Wars product during the vintage years, nearly all of it obtainable by the average collector.

But first let's take a look at the MPC stuff through the lens of toy-collecting history.

Plastic model kits comprise a classic toy category. While this category dates all the way back to the 1930s,  horror- and fantasy-themed kits didn't become popular until the 1960s, a decade in which youth interest in horror movies and related paraphernalia reached a fever pitch. It's partly due to this surge in interest that monster kits are reckoned among the classic toys of that era.

Hey, if you're keen to learn a bit about the mid-century fad for horror toys, I recommend picking up Metallica guitarist Kirk Hammet's book Too Much Horror Business, which combines photographs of his amazing horror collection with lots of insightful commentary.

Anyway, if you squint a little, I think it's possible to see MPC's Star Wars kits as being part of a tradition of genre-movie toys dating back to 1961, the year Aurora introduced their famous kit based on Frankenstein's monster.

And if you don't understand the importance of tradition, I suggest you consult Topol, whom you can trust because his name makes him sounds like an unproduced Ewok.

MPC, short for Model Products Corporation, was founded in the 1960s as a competitor to Aurora, AMT, and other purveyors of build-it-yourself plastic gimcrackery. Around the turn of the decade the company was purchased by General Mills and made part of the General Mills Fun Group, a conglomeration that also included Kenner.

Presumably, MPC acquired the rights to produce Star Wars model kits by virtue of Kenner's master toy license. As Kenner had little experience with this kind of product, it was natural for them to allow their sister company to carry the line forward. 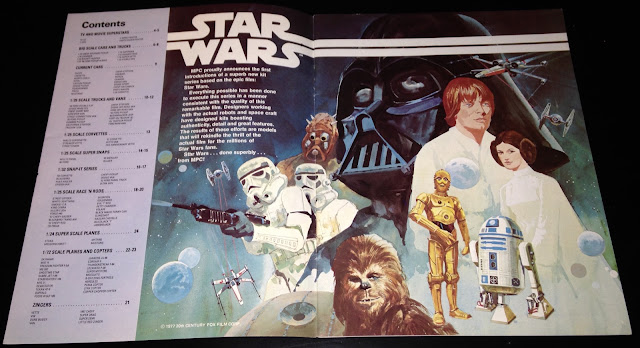 MPC's association with Star Wars was announced to retailers via this impressive two-page catalog spread.

As the text explains, Industrial Light and Magic allowed MPC's designers to reference the actual props and models used in the creation of the movie, resulting (it was hoped) in kits that displayed a high degree of authenticity.

The announcement utilizes a terrific piece of artwork. It's interesting in that it depicts several characters -- Princess Leia, Stormtrooper, Tusken Raider -- that MPC never got around to reproducing in plastic. 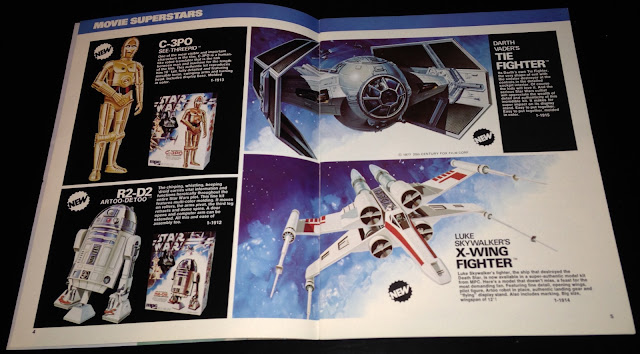 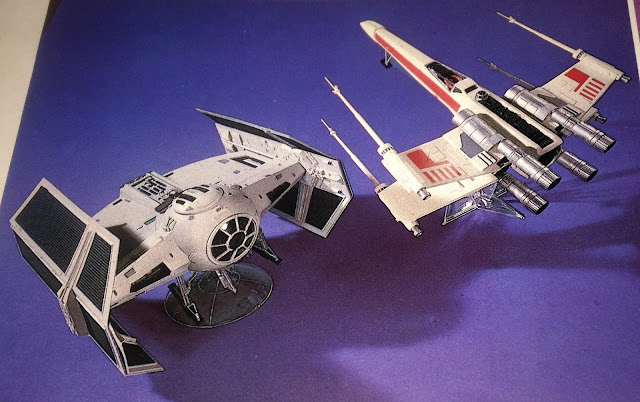 As this shot from French advertising shows, the vehicle kits were pretty movie-accurate. They were so accurate, in fact, that they were later used by ILM in creating effects shots for the second and third Star Wars films.

Why create an entirely new model when you can walk into any store and buy most of what you need off the shelf? 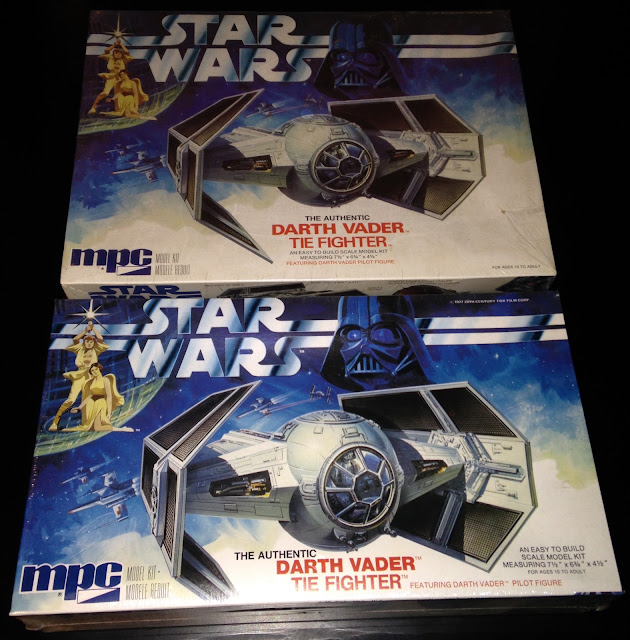 Authentic though the models were, the boxes in which they were packaged didn't utilize photography; rather, they employed carefully rendered paintings of the vehicles within an outer-space setting.

In this MPC conformed to common model-industry practice. Aurora's monster kits had always eschewed the rather prosaic realism of photography in favor of lurid paintings by artists like James Bama. By doing this Aurora managed to tickle the imagination, thereby tapping into the disreputable thrill evoked by the classic horror pictures on which their products were based.

With their Star Wars packaging MPC achieved something similar: Their paintings evoked space opera in all its sweep and romance.

Is it fair to say that MPC's packaging art is among the nicest of the vintage era? 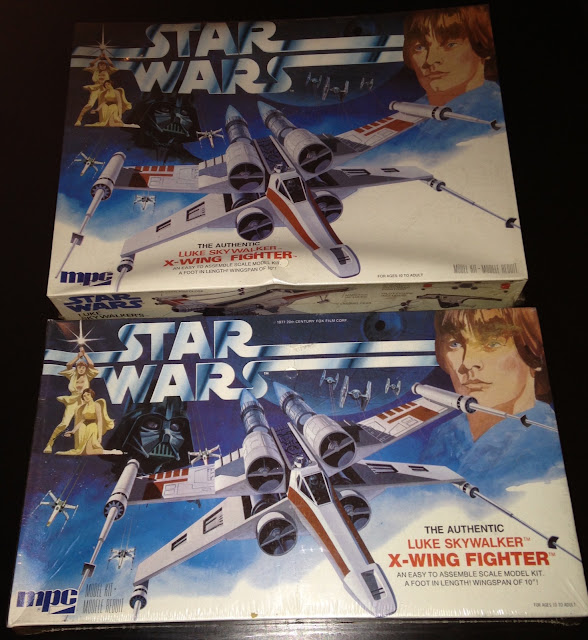 My photographs of the TIE and X-Wing models each show two examples of the boxed product. I did this in order to demonstrate a packaging variation that affected the early history of the line. While the first releases of these kits came in boxes approximately 10" x 14" in size, the boxes were later height-reduced by two inches, causing subsequent issues to measure approximately 8" x 14".

If you look closely at the X-Wing boxes featured in the above photo, you'll note that the composition of the painting adorning the lower (later) box has been substantially squished, causing the X-Wing's cannon to obscure Mark Hamill's fetching butt-chin. 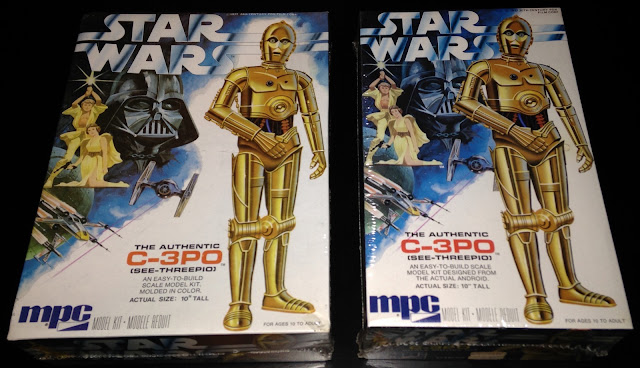 You can imagine the shipping expenses MPC must have avoided by reducing the volume of the cases used to ship their assortments. 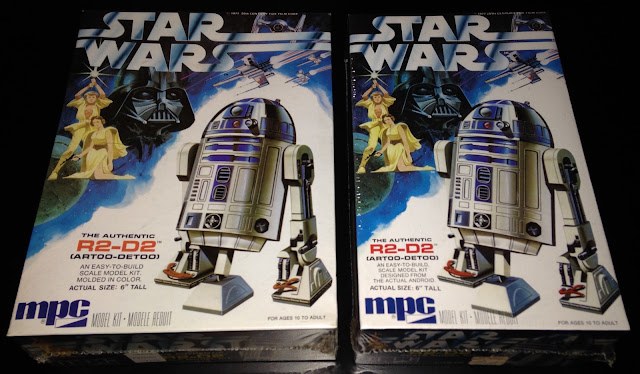 The R2-D2 is the only one of these kits I attempted to build as a child. I remember being mightily frustrated by the process of gluing the little instruments into the well behind the movable panel in his cylinder. If memory serves, the glue, when sloppily applied, caused the chrome on his dome to smear, leading to splotchy silver fingerprints over the majority of the droid's figure.

The experience caused me to swear off model kits until I was old enough to enjoy getting high off the glue. 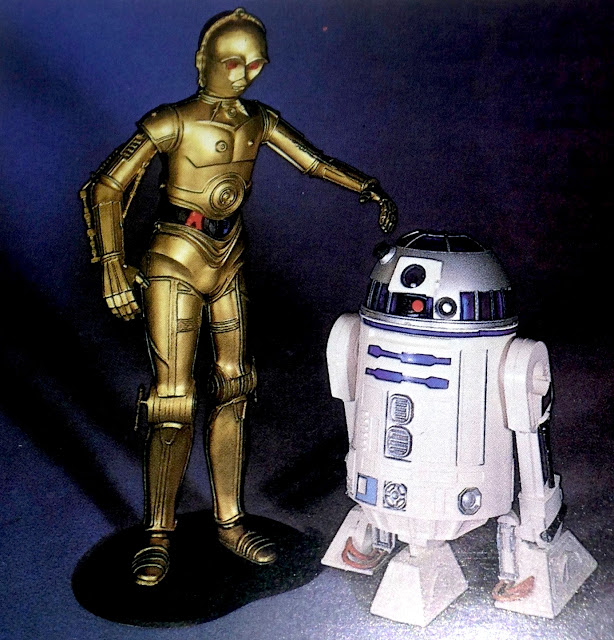 The droids were scaled so that they could be posed together.

It's a shame MPC didn't provide each with a background, perhaps representing a control room on the Death star, that could be joined to represent a unified scene when the two kits were placed side by side. 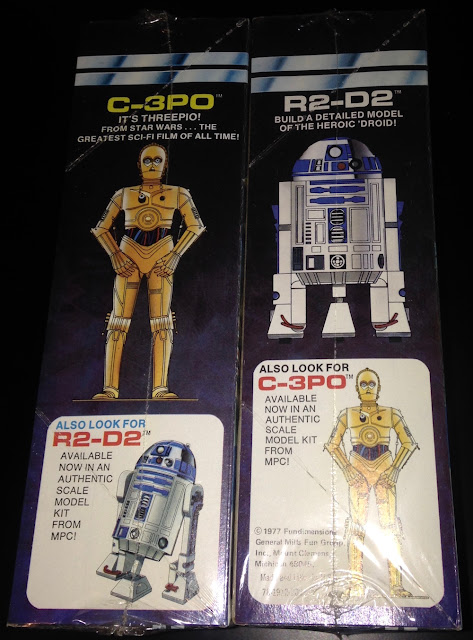 I particularly enjoy the art that adorned the sides of the boxes of the droid models. 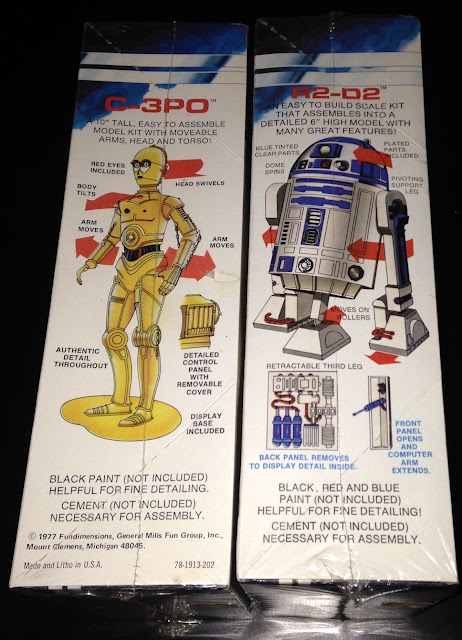 The graphics on the droid boxes were explicit as to the features incorporated into the corresponding models. 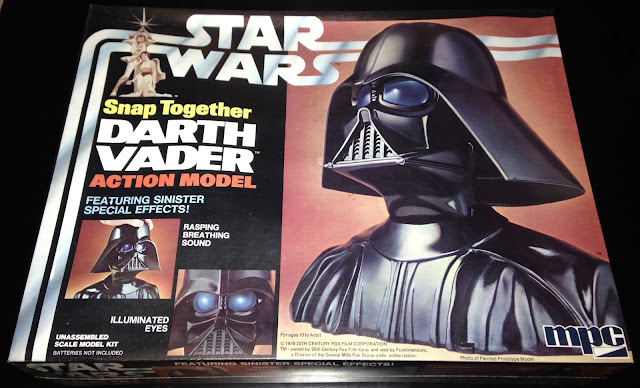 Released later in 1978 was this rather snazzy-looking bust of Darth Vader.

Unlike the kits described above, its box featured a straight photograph of the product.

However, it made up for the lack of art by employing the familiar "double-racetrack" motif. This combined with the presence of the Jung-inspired Luke-and-Leia logo give it a strong visual association with the Kenner line of product. 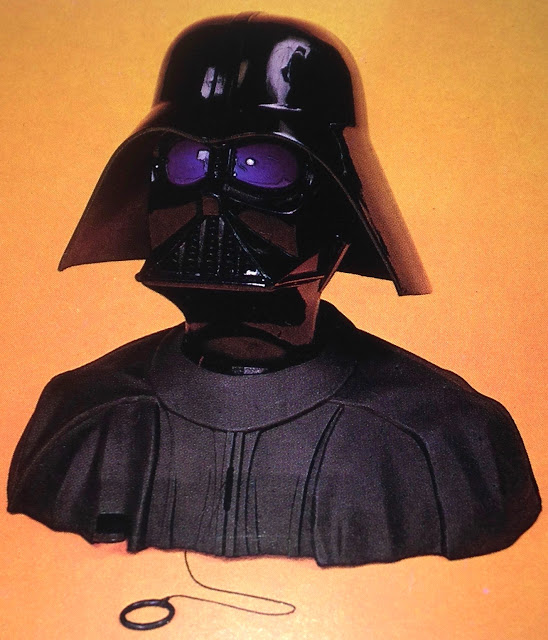 The Vader bust featured light-up eyes and emitted a breathing noise when its head was made to bob.

I believe the cord you see in this photo activated the lights. Or did it activate the head motion? Hey, I just collect these things. Don't ask me to play with them too.

This is one of the few MPC Star Wars kits that was never re-released after the '70s. 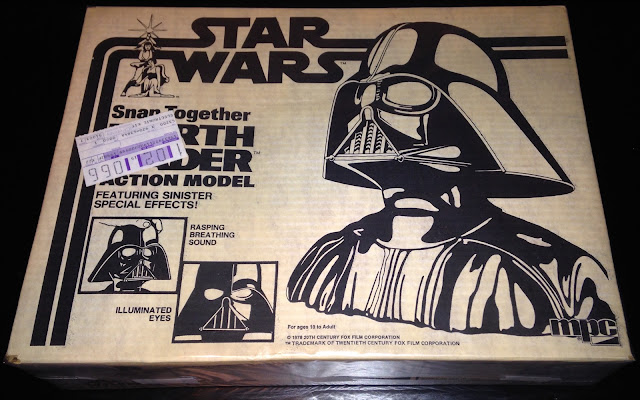 The Vader bust can also be found in the above-pictured line-art box. It was used to ship examples ordered through major catalog retailers during the 1978 Christmas season. It's similar to the line-art box used for catalog issues of the Duel at Death Star racing set. 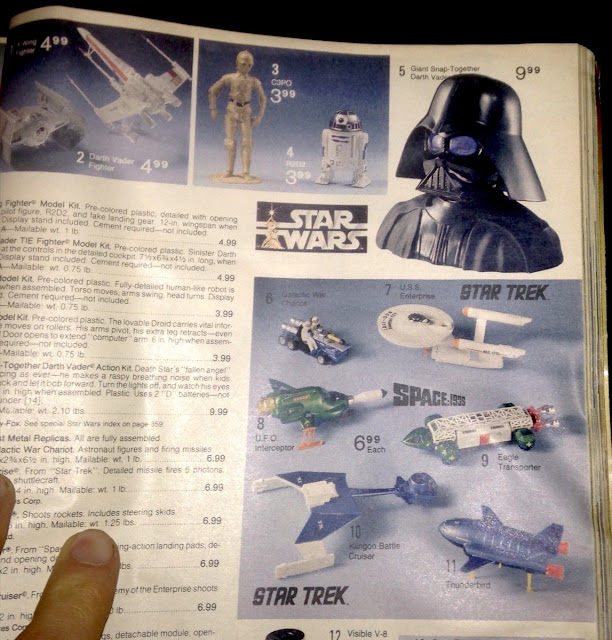 Here's the page in the JCP catalog on which the model was advertised. As you can see, it was featured fairly prominently.

The product was also featured in the Montgomery Ward catalog during the 1978 Christmas season.

Wut? Did you also have to take the model apart in order to build it?

But that's somewhat less weird than the description of Darth Vader as the "Death Star's 'fallen angel.'" 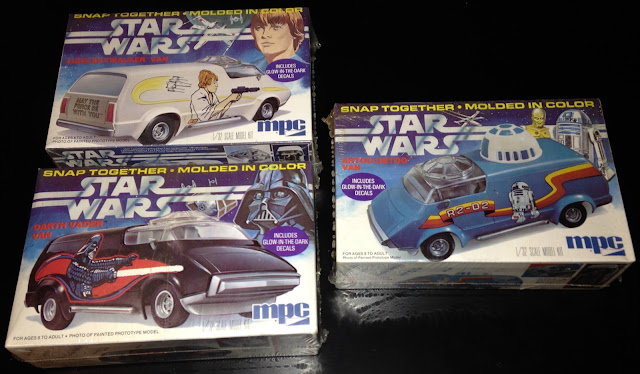 Rounding out MPC's 1978 releases was this trio of vans adorned with groovy Star Wars graphics.

These days the only vans being produced in association with Star Wars are sneakers.

Hey, have you ever seen the movie called The Van? It was released in 1977, a mere month prior to the release of Star Wars, by legendary purveyors of junkola drive-in movies, Crown International Pictures. The movie follows Bobby in his heroic attempts to score with the chicks. He has zero success -- until he acquires a van, outfits it with shag carpeting and television sets, and drives around town like a muthereffin king on wheels. Girls then come running from miles around just for a ride in Bobby's van. 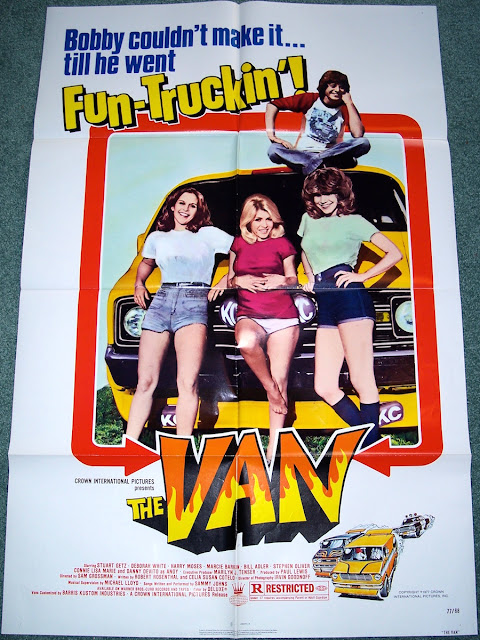 As the voice in the trailer says: "When you can't make it, you can go fun-truckin' in the foxiest four-wheel movin' violation on rubber." 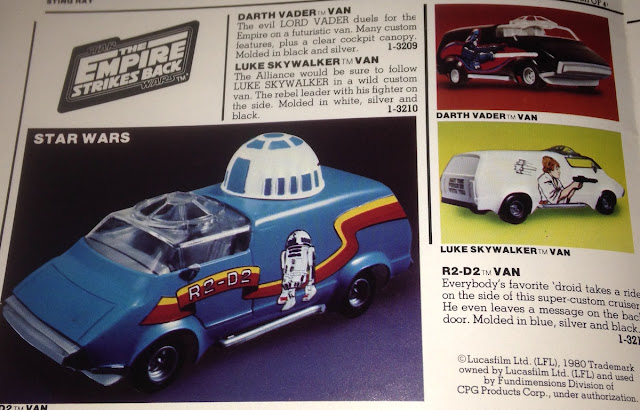 As this image shows, the vans survived into the Empire Strikes Back era.

It's a good bet that the molds used to produce the vans themselves were recycled from kits previously issued by MPC. 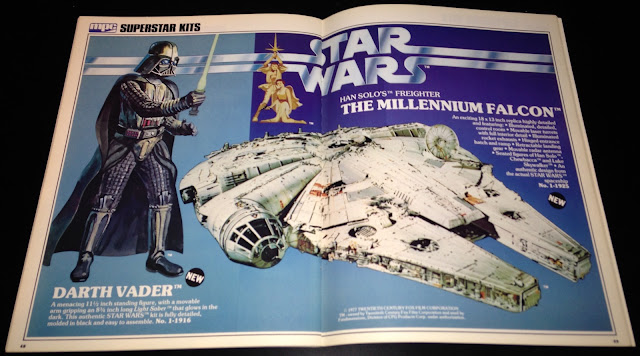 1979 saw the debuts of two new Star Wars kits from MPC: a figural Darth Vader and a large Millennium Falcon.

The latter product is rightly considered the flagship of the entire line. 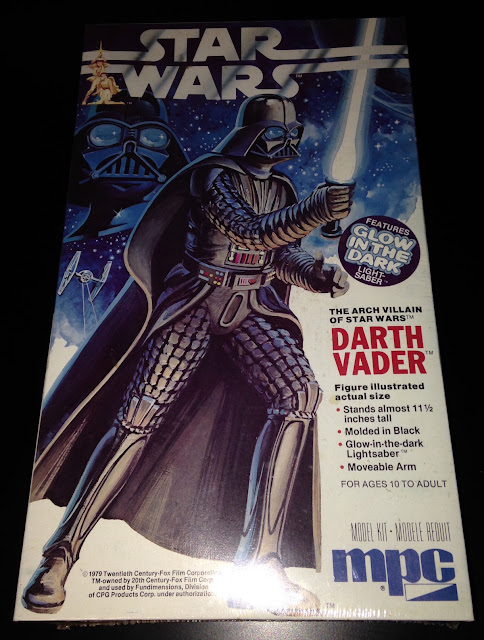 The box in which the Vader kit came packaged was similar in style to those issued with the R2-D2 and C-3PO kits of the previous year. 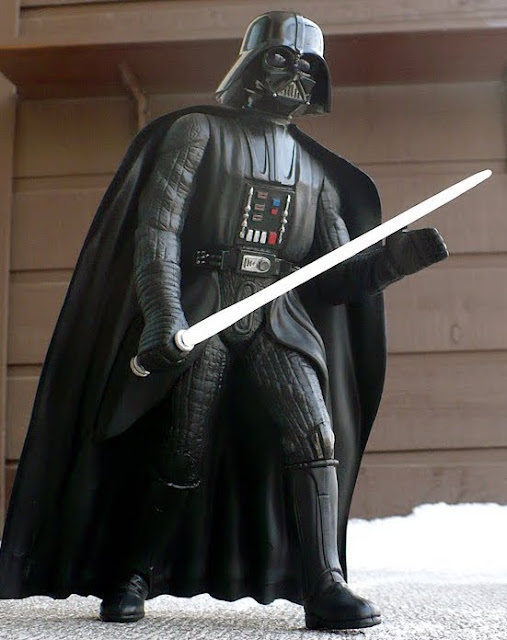 Fully assembled, the model stood nearly a foot in height.

While that sounds pretty cool, the figure itself is none too impressive. In particular, its pose is awkward. It seems to capture the dark lord as he's raising his left hand to prevent himself from falling over and stabbing himself in the face with his glow-in-the-dark lightsaber.

But if MPC's Vader left something to be desired, the company hit a home run with its rendition of Han Solo's smuggling freighter, the Millennium Falcon. In fact, I think it's reasonable to view the MPC Falcon as one of the best products issued during the early years of Star Wars merchandising. 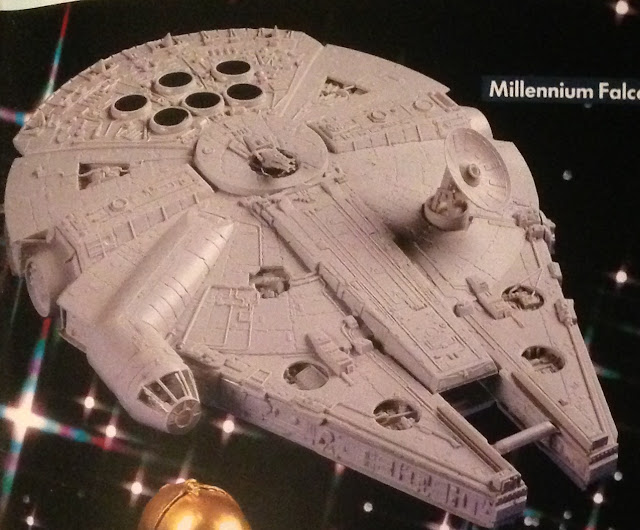 Measuring 18" x 13", the model was nearly as large as Kenner's action-figure version of the ship, and it had the advantage of being a much more accurate representation of the craft seen in the movie. It even included electronic components that illuminated the cockpit, in which were installed miniature versions of Han Solo, Chewbacca, and Luke Skywalker.

Although the model used in this advertising image appears to be unpainted, in the hands of a dedicated modeler the built-up kit could be decorated so that its markings matched "those of a ship that blasted its way out of Mos Eisley." 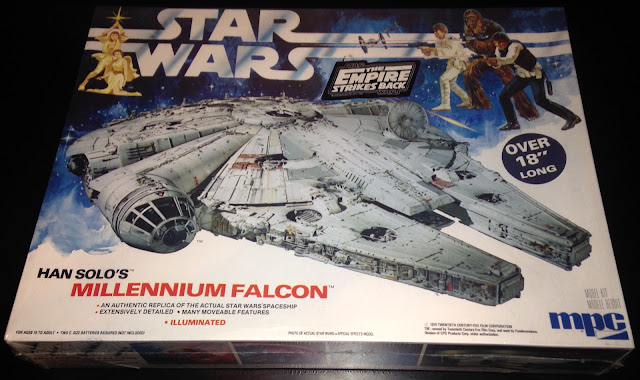 The box for the MPC Falcon combined a painted background with what appears to be a photo of one of ILM's effects models.

If you're wondering about the Empire Strikes Back sticker that appears on the box...well, you'll have to wait until the next article in this series to learn more about it.

In subsequent posts we'll take a look at the kits released by MPC in conjunction with The Empire Strikes Back and Return of the Jedi. Until then, keep on fun-truckin'.


Special thanks to Mark Enright for his help in assembling the information in this article.
Posted by Ron at 8:00 AM