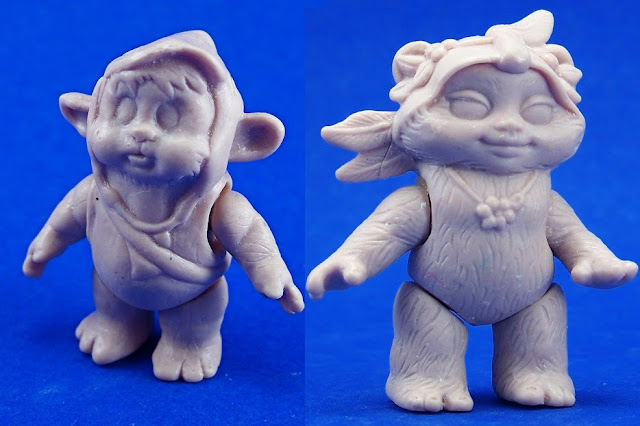 While the average Star Wars fan has already seen Rogue One 17 times, he has no clue what a Bondo or a Chituhr is. In fact, he probably hears those words and assumes one refers to automotive putty and the other is an uncouth slang term for "bathroom."

Nevertheless, the unreleased figures developed for the short-lived Ewoks line are among the primo pieces available to collectors of pre-production material. Six new figures were set for release in 1986, when the line was unceremoniously cancelled. They are: Chituhr, Chief Chirpa, Bondo, Paploo, Morag, and Weechee. Putting together a full set of these figures -- in any form -- is a labor worthy of Hercules, or at least Lou Ferrigno.

But the story concerning unreleased Ewoks figures doesn't end there. Four additional characters from the animated series are known to have been considered for release by Kenner. While they were cancelled prior to production, their existence is worth considering when discussing the line and speculating about its history. 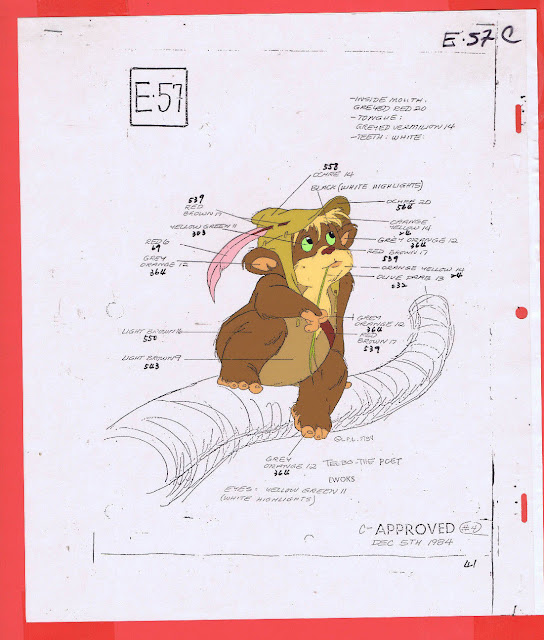 Although the Teebo released as part of the Return of the Jedi line wore a helmet made from a slain pig, his namesake from the animated series was anything but a tough customer. As is noted on the above model cel, made for reference by the animators at Nelvana, the cartoon Teebo was a poet who wore a cowl that made him look like a hairy Keebler elf.

Ewok poetry is unique in that it consists solely of words rhyming with "nyub."

According to the ever-helpful Wookieepedia, Teebo was featured in most of the Ewoks episodes aired over the show's two seasons, meaning he was one of its principal characters.

Wookieepedia also makes the claim that "Teebo had a rocky courtship with Latara, eventually getting together with her in his later adolescence..."

Is this the only known instance of an Ewok hookup? 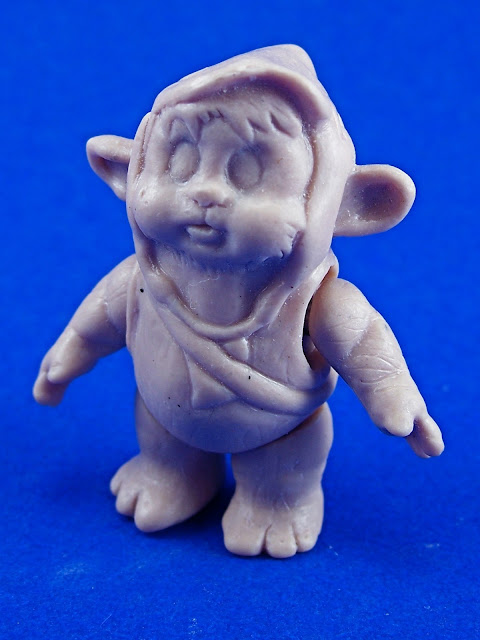 The overall look of the existing Teebo prototype closely matches the character seen on the model cel. 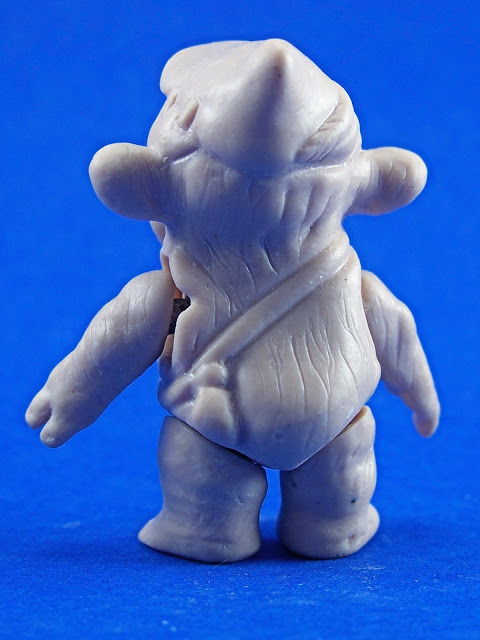 Teebo's details are less sharp than those found on the other figures we'll discuss. This may indicate that less work was done on Teebo. 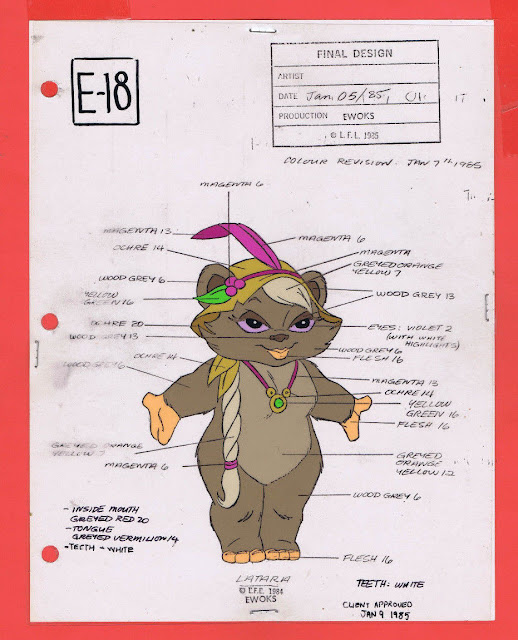 Kenner is also known to have done some work on Latara. I guess they pretty much had to. Had there been no Latara figure in the line, with whom would Teebo get it on?

Like Teebo, Latara was a central figure in the show, appearing in the majority of episodes. Per Wookieepedia, she was self-involved and craved attention -- which makes her sound like the Blanche Devereaux of the Ewok Village. 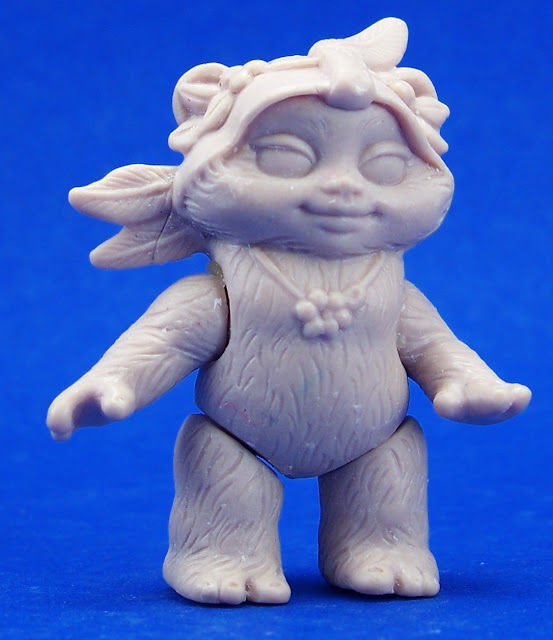 The existing Latara figure is interesting in that, though it displays a high degree of finish, some of its details differ from the final(ish) character design seen on the model cel. Most obviously, the model-cel image displays a prominent lick of hair and a braid, neither of which is evident on the figure.

It's possible the Kenner Latara was based on an early design of the character, which was later modified by Nelvana. 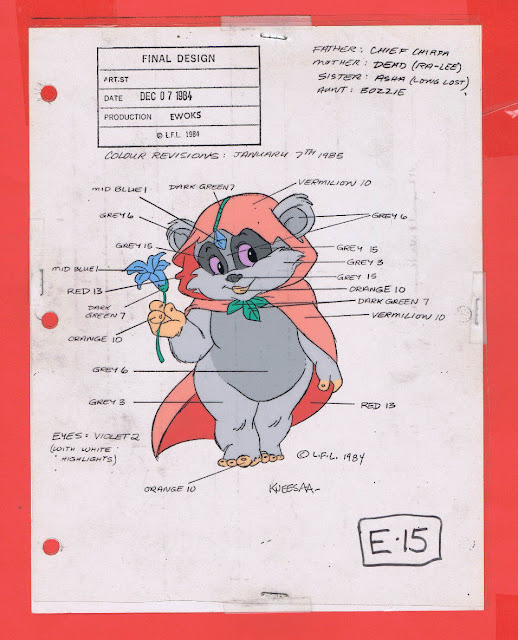 Lest Latara be the sole Ewok damsel tasked with fending off the advances of amorous Teebo, Kenner also planned a figure representing Kneesaa.

Chief Chirpa's daughter, Kneesaa was a sweetheart, a princess, and an unapologetic member of the Ewok One Percent. 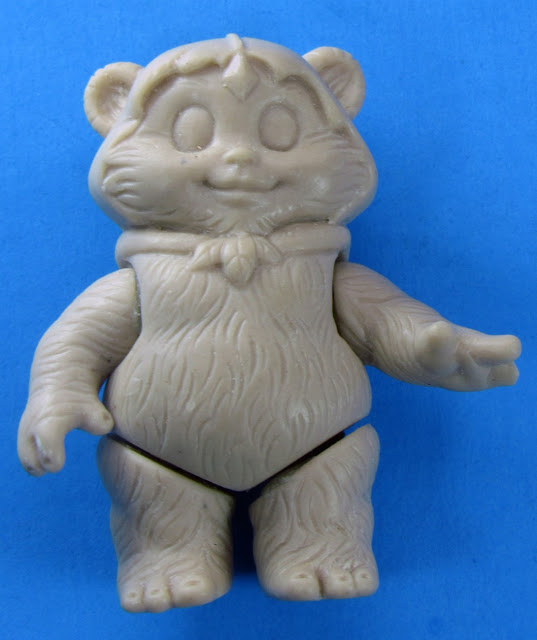 Like Latara, the Kneesaa figure is worked to a pretty high level of refinement. You can imagine a production figure looking very much like this. 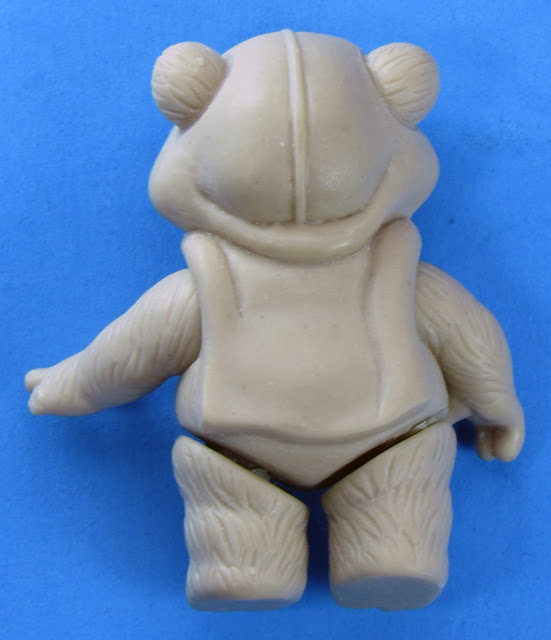 The back of Kneesaa reveals that Kenner shortened her cape considerably, probably because a cape that draped over the legs would not have been viable absent a separate rubber or softgoods element. 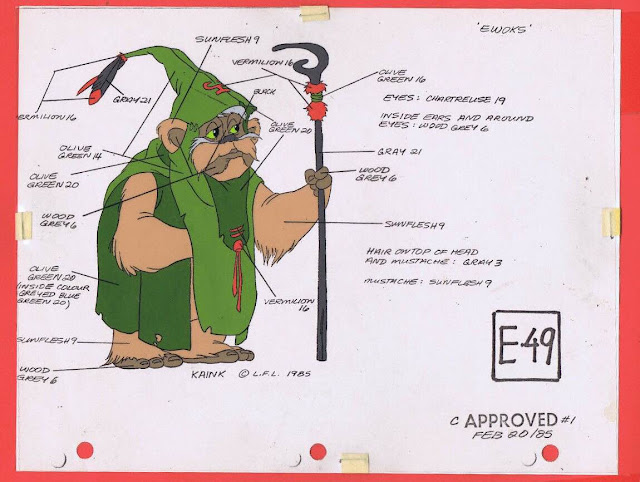 Kaink first appeared in the live-action made-for-TV movie, Caravan of Courage. If you don't remember her, it's probably because your brain has erased all memories of Caravan of Courage as a means of preserving your mental well-being.

Kaink also appeared in the animated series, where she helped Wicket restore the Ewok Battle Wagon, so that he could heroically -- uh -- help Kenner sell toys to captive and suggestible children. 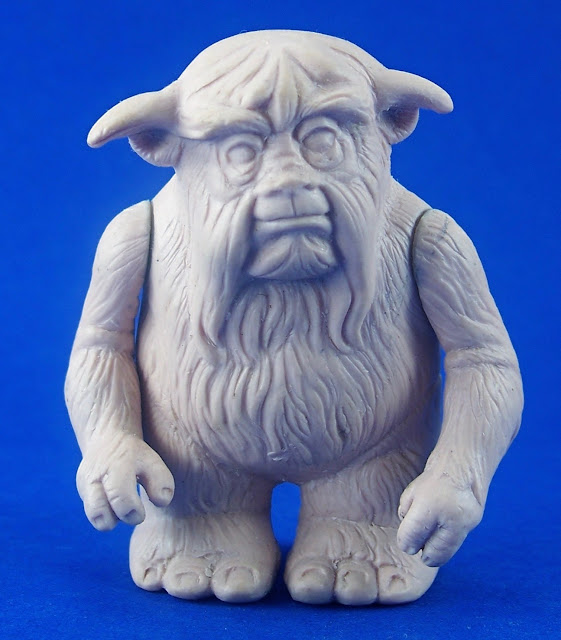 When this Kaink figure first surfaced, it inspired some debate as to whether it represented an Ewok, a non-Ewok character from Ewoks, or something wholly unrelated to Star Wars, like a berserker mogwai. 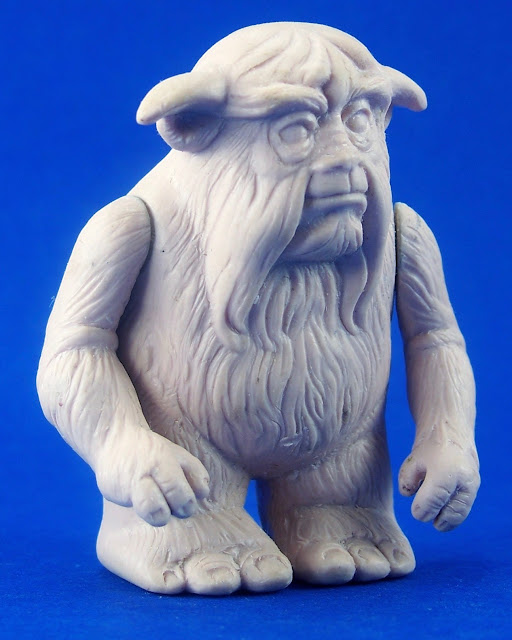 Kaink looks sort of unusual for an Ewok in part because of the presence on the figure of those horn-like protrusions near the ears. Those protrusions, which are not present on the model cel, are odd. So is the rather unadorned nature of the figure's form. All of the other figures in the Ewoks line feature molded-on apparel and accessories. 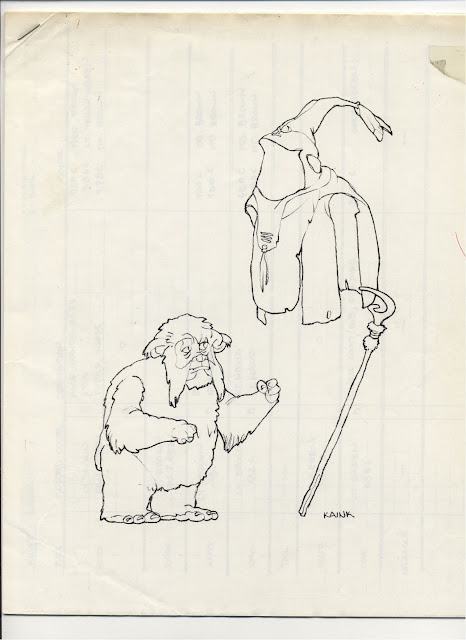 Fortunately, this image, from a batch of reference material sent by Lucasfilm to licensees, makes it clear that our Kaink figure represents the character sans exterior cloak.

Interestingly, none of the figures released (or almost released) in association with the Ewoks line features removable pieces of apparel. Had Kaink been produced with a separate cloak, it would have been the sole figure in the line to bear such an accessory. From a manufacturing standpoint, this was a fairly costly proposition -- especially since Kaink was a minor character, appearing in only two episodes of the show!

Of course, it's also possible that, had development on the figure progressed, that cloak would have been integrated into the body of the figure.

You may have noticed that the legs on the Kaink figure are not articulated. As we'll see, this doesn't indicate that the production figure was intended to have immovable legs. Rather, it probably relates to the aforementioned cloak and complications resulting from incorporating it into the figure, either as a separate element or as a sculpted-on detail. 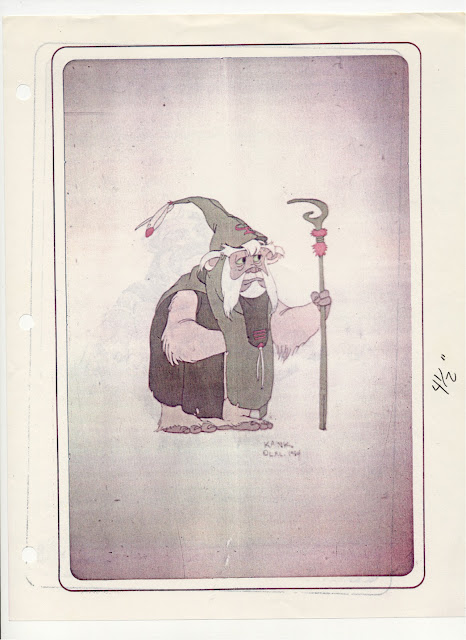 This second image, also provided by LFL to Kenner, demonstrates that, early in the development of the series, Kaink had a longer mustache and horn-like protrusions of hair. Clearly, it was from early images such as these that the folks at Kenner worked while developing their prototype.

I think we can be reasonably certain that the appearance of Kaink was modified prior to production of the animated series. In particular, her hairiness was toned down.

As you may have guessed, all of these pieces are composed of wax of the kind used by toy creators to sculpt action figures. However, they differ in notable ways from finished pieces of three-dimensional toy art.

So what are these? My hunch is that they represent preliminary sculpts -- modified wax reworkings of earlier clay roughs -- dating from the early days of development on the Ewoks line. At that point in time, all of these characters must have been intended for release by Kenner as first-series Ewoks figures.

Further indication that these were developed early in the line can be gleaned from the chronology of the Ewoks cartoon. As already mentioned, Kaink appeared in only two episodes. Both of these episodes aired during the show's first season. As there was no Kaink in Nelvana's Ewoks: Season Two, there would have been no Kaink in Kenner's Ewoks: Series Two.

Had Kenner opted to release these characters, it's likely these pieces would have been utilized to create more refined sculpts, incorporating all of the typical hardware, for use in generating hardcopies and then tooling. 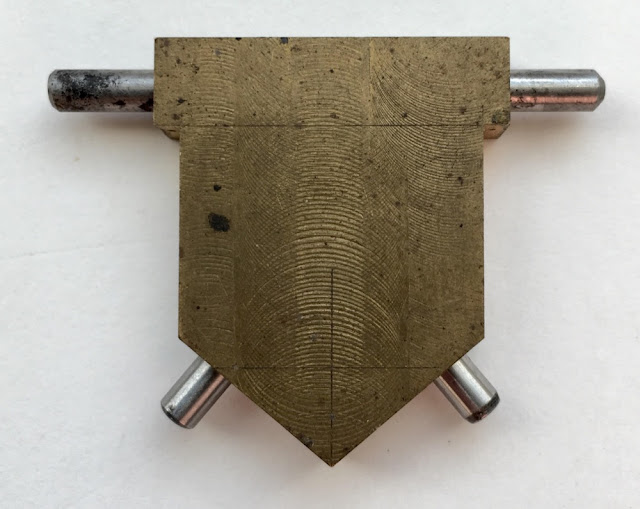 In fact, evidence that further work on these figures was planned exists in the form of a brass buck created for use in the never-executed final sculpt representing Kaink.

The buck, made from machined brass, would have been incorporated into the torso of the Kaink sculpt, and would have allowed the sculptor working on Kaink to properly proportion and articulate the figure. 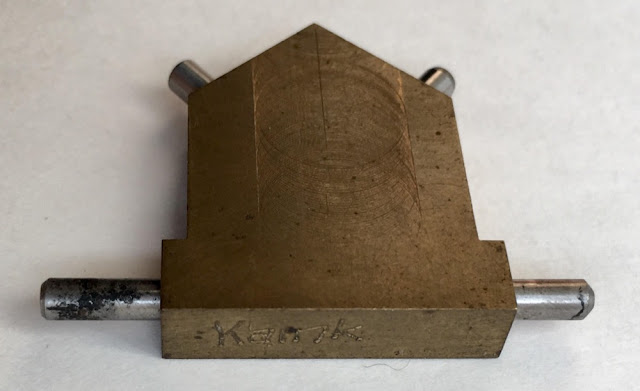 Each steel pin you see extending from the block would have been inserted into a nylon disk recessed into the joint of each wax limb, allowing for a snug fit and smooth movement. As the buck includes pins corresponding to the figure's legs, it proves beyond doubt that Kaink's legs would have been articulated.

As it happened, Kenner nixed Teebo, Latara, Kneesaa, and Kaink, and instead released a bunch of Duloks. That decision left these pieces as developmental relics. To collectors they represent tantalizing suggestions of what might have been had the line followed a different course.

Thanks to Todd Chamberlain, Chris Georgoulias, and Tracey Hamilton for contributing to this post.