Kenner reinvented the action figure with Star Wars. While the toy industry had seen similarly scaled figures prior to 1978, the success of the Star Wars line, its integration with a wide range of accessories, and its intimate connection to a blockbuster media franchise forged a new standard -- one that Kenner virtually monopolized for a few years after the line debuted.

But by 1983 Kenner's competitors had caught up.

In 1982 Hasbro debuted G.I. Joe: A Real American Hero. The line leveraged the public's existing familiarity with the Joe brand to launch an entirely new, small-scale range of military figures. And in the same year Mattel, traditionally a powerhouse in the realm of girls' toys, enjoyed a major success with Masters of the Universe.

Both lines boasted figures that were arguably of higher quality than the ones that were part of Kenner's Star Wars range. G.I. Joe had more articulation; the MOTU figures were both larger and outfitted with unique action features.

More importantly, both of the newer lines were eventually supported by cartoon series. This was revolutionary. Prior to 1983, FCC regulations prevented the airing of kids' shows that doubled as advertisements for commercial products. And there was no doubt that both He-Man and the Masters of the Universe and G.I. Joe: A Real American Hero were little more than animated toy commercials. Kids could see something in action on the small screen, then run to the store and buy a replica of it.

Whereas Star Wars remained a mostly see-it-in-the-theater experience, the cartoons screened in homes on a daily basis. This limited Kenner's flexibility. Being tied to a movie franchise meant the company had to wait for Return of the Jedi to smuggle subliminal toy desires into the minds of America's youth. Mattel, on the other hand, need only wait for the next round of He-Man cartoons -- which were cheaper and easier to produce than blockbuster movies.

Differences in mediums and distribution led to disparities in quality. The folks at Hasbro and Mattel could let their imaginations run wild; whatever they dreamt up, the animators could plop into an upcoming episode. But Kenner's designers were forced to pore over the The Empire Strikes Back in an effort to find background characters that might make for interesting action figures. They had a tough time. Consider the Bespin Guards. Lame figures, right? Well, there are two of those guys. And they each came with two accessories: A laser pistol and a massive inferiority complex.

"Inferiority complex"is a term that sprang to mind when I saw the below ad, posted by collector Kevin Lentz on Facebook. (He credits He-Man.org with the image; give the site a look if you're interested in MOTU.) The ad is Mattel taking a big, smelly pee on the action figure territory. They'd had a success with MOTU, and they wanted everyone to know about it -- including He-Man's wimpy counterparts in the toy aisles.

I imagine his conversation with Scarlett went something like this:

Luke Hoth:  Who's the sorehead in the furry shorts?
Scarlett:  . . .
Luke Hoth:  Hey muscles, your over-compensation is showing.
Scarlett:  . . .
Luke Hoth: They were going to package me with a lightsaber. I didn't want one, really. Truth is, I'm pretty satisfied with these molded-on monoculars. If you look through them backwards the world looks tiny. Oh look, there's Rebel Commander! Hey tiny Rebel Commander! Heeeyyyy!

Anyway, by 1984 Kenner's status as the leader in action figures was in jeopardy. And, as the below slides make clear, the company was doing what it could to remain on top.


The slides are from an internal presentation given in 1985. As you can imagine, the specter of a world without Star Wars movies loomed over the proceedings.

Yet the first slide puts a positive spin on things. Even though Jedi was old news, Star Wars sales had increased in '84. And despite competitive threats from other companies, "an aggressive defensive plan" had been "developed and implemented." 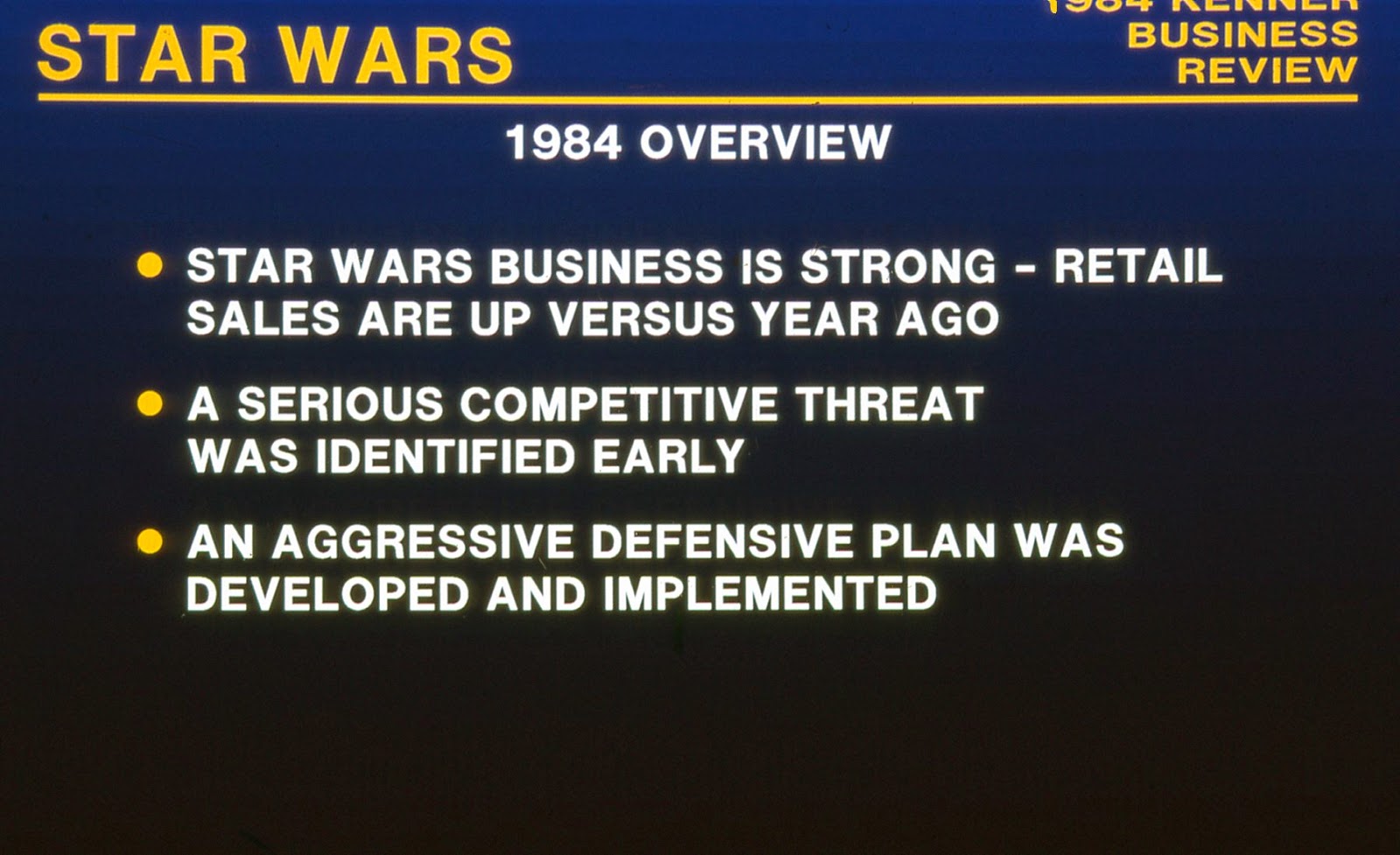 What, precisely, was this plan? I don't have a slide that details it. But I think it's likely that it included initiatives aimed at inculcating a love of Star Wars in younger toy buyers.

It was in 1984, remember, that Kenner rolled out the Young Jedi Knight program. The company had also participated in a pedal-car giveaway that was heavily promoted through large retailers. On top of that, Kenner was in talks to produce toys in support of the Droids and Ewoks cartoon programs. Both debuted in 1985, though neither met with the success of He-Man or G.I. Joe.

The second slide provides a fascinating glimpse into the mid-'80s action figure market. 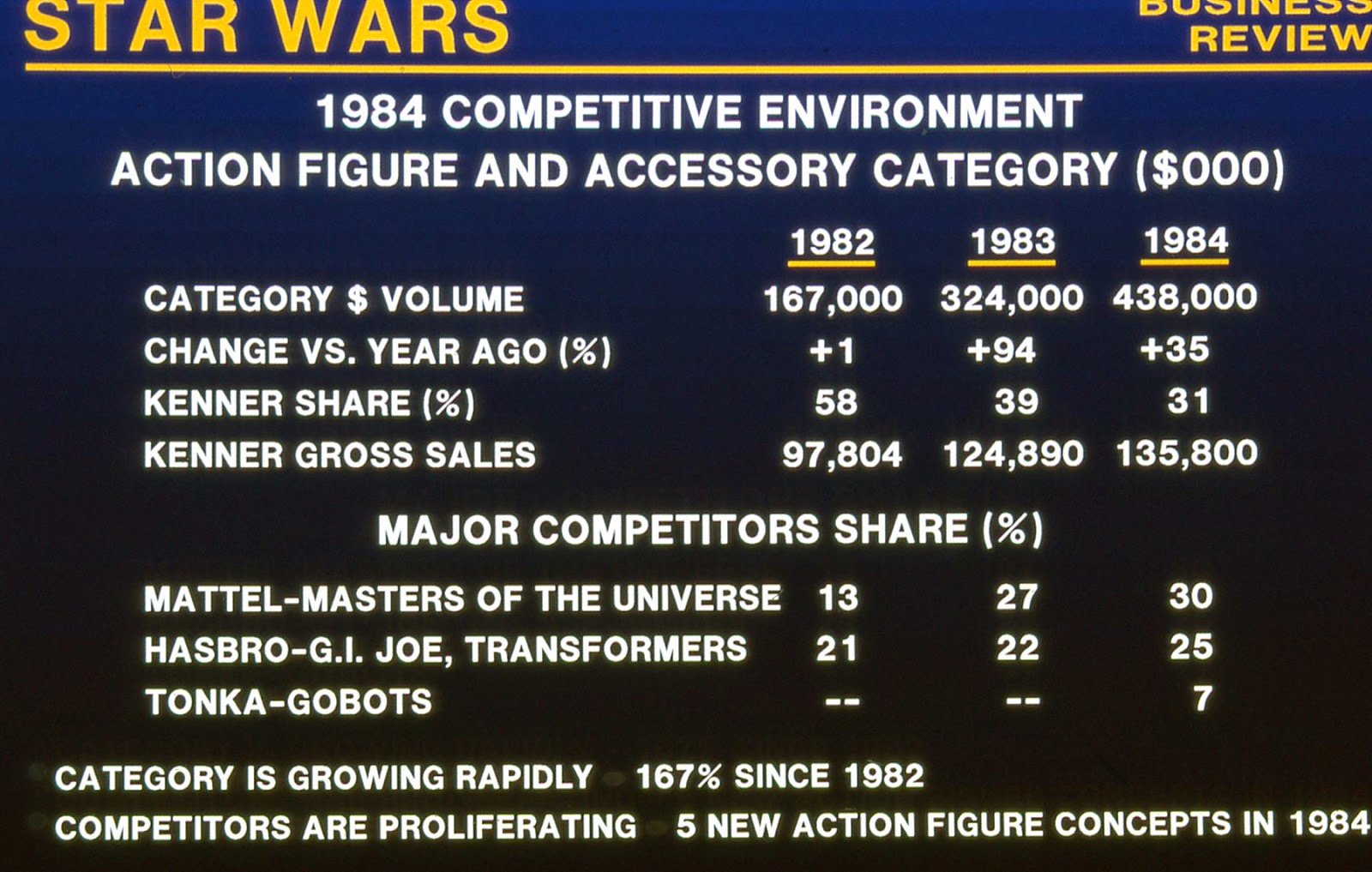 It reveals that though Kenner's sales had increased during each of the previous years, their share of the market had plummeted from 58% in 1982 to just over 30% in 1984. In fact, by the time of this presentation, He-Man and his 'roided-out buddies commanded a share of the market that was nearly equal to Kenner's.

In the end, Droids and Ewoks failed to save Star Wars, and The Power of the Force line lasted only a single year. By '86 Star Wars had been relegated to bargain bins and close-out dumps, from which nary a bubble emerged undinged.

Fortunately, it was only nine years before Star Wars returned to toy stores. When it did, the figures were almost as muscly as the Masters of the Universe. Maybe they'd learned a lesson during their exile?

What toys were you playing with in '85 and '86? Did you cheat on Star Wars with He-Man? If so, did he remember your name the next morning?