I hope life has been treating you well this Fall, as it’s one of my favorite seasons given it’s the last semblance of decent weather before we head into the abysmal Midwest Winter. Of course this Winter I’m spending my time in Southern Florida, so as a lot of you are digging out of three feet of snow, I’ll be enjoying 70 degree weather. Hate me yet? If not you might by the end of this update, as this month we have some truly great pieces, most of which you will NEVER HAVE! Okay not trying to be overly dramatic, but this month we have a few very rare pieces from the Star Wars vintage toy line that are sought after amongst collectors of all types, some of which have less than 10 examples in existence. So without wasting any more time, here’s the November update, Snootchie Bootchies!

First up is simply the best of what came on the market this past month as far as my opinion is concerned. You’ll hear me talk a lot about ways to get the most for what you’re selling, such as the time of the day, week and even year, the titles of your auctions, no reserves and several other methods to get the most for what you’re selling. One of the biggest ways to get a lot of attention and traffic is listing multiple items at once, especially if you have a certain category of items, such as MISB SW, or MOC ESB figures. In these cases you hit up people’s saved and regimented searches in a more aggressive fashion and thus increase traffic to your auction pages. This month we have one seller who did just that when they listed several carded Uzay figures at once. The seller took the opportunity to showcase his items at the same time and was rewarded by great results in the ending prices. Let’s take a closer look at three of the auctions specifically.

First we have the Blue Stars figure. One of the most sought after loose or carded figures in the hobby, he’s become a staple of high end collecting and is as rare as he is legendary. Featured on one of the last episodes of Toy Hunters, he’s become more popular amongst collectors over the past few years. The Uzay take on the Snowtrooper figure is one that, unlike Headman or some others, makes some sense.  How do you show that this guy belongs in the snow, it’s simple -- paint the dude an ice cold blue, how more frigid can he get? A great novelty out of the Uzay line and a great rarity for those high collectors who spend their time collecting Uzays, 3 Packs, and POTF proof cards, you know the types I’m talking about, the ones that can’t be bothered with simple great condition production stuff…

This particular piece did quite well given its condition. A Q40 is pretty much a decimated item (even if it’s an Uzay) and the Q grading, (which according to AFA they don’t give on figures…) makes it questionable if you can even call it a MOC item. By comparison the one that sold last Spring on Toy Hunters was an AFA75 and sold for over $8,000. Thus with a slope in condition of basically half, you have something that still brought over half the price of another recent auction -- impressive given the diminishing returns you see with lower quality figures. 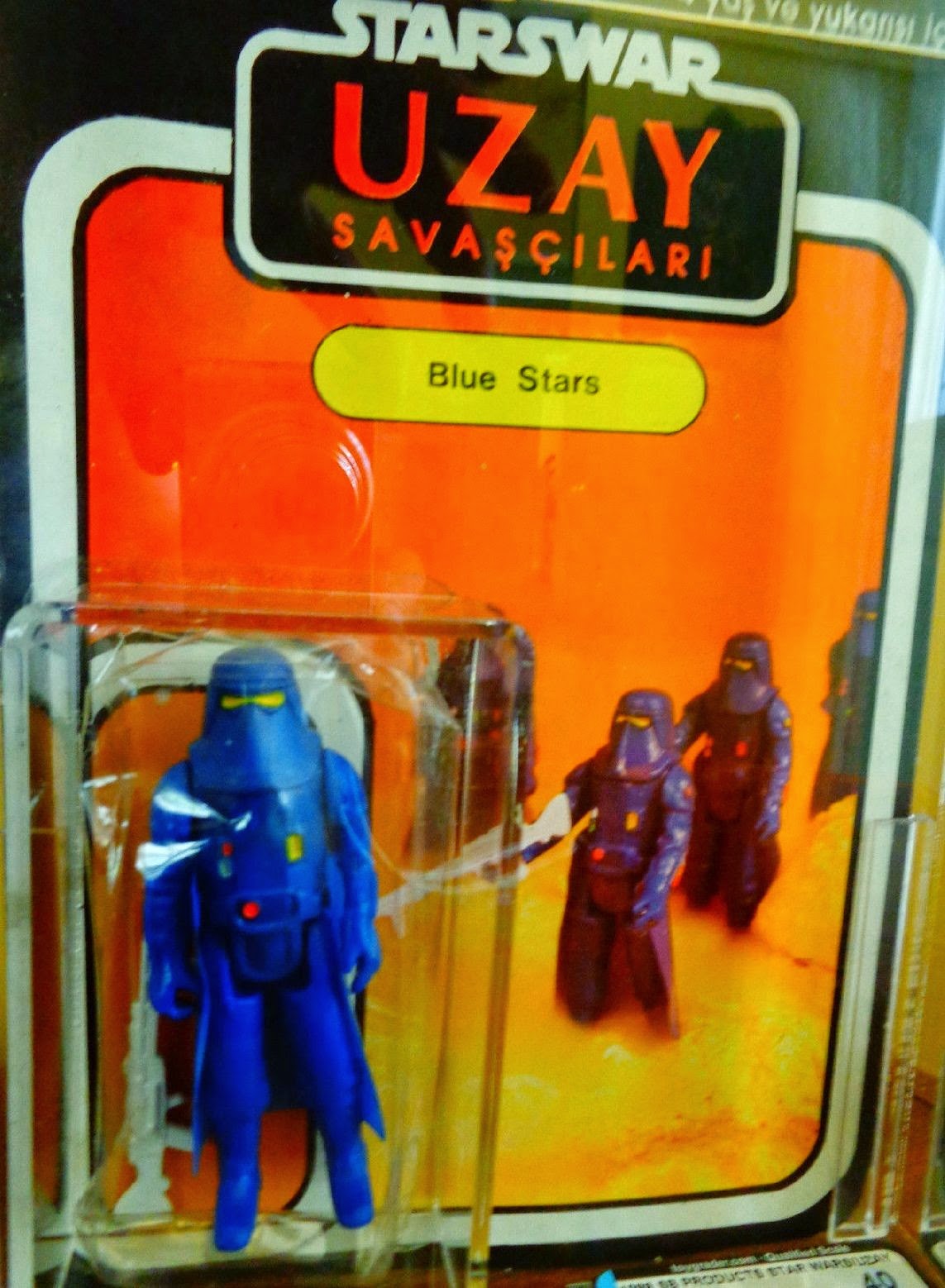 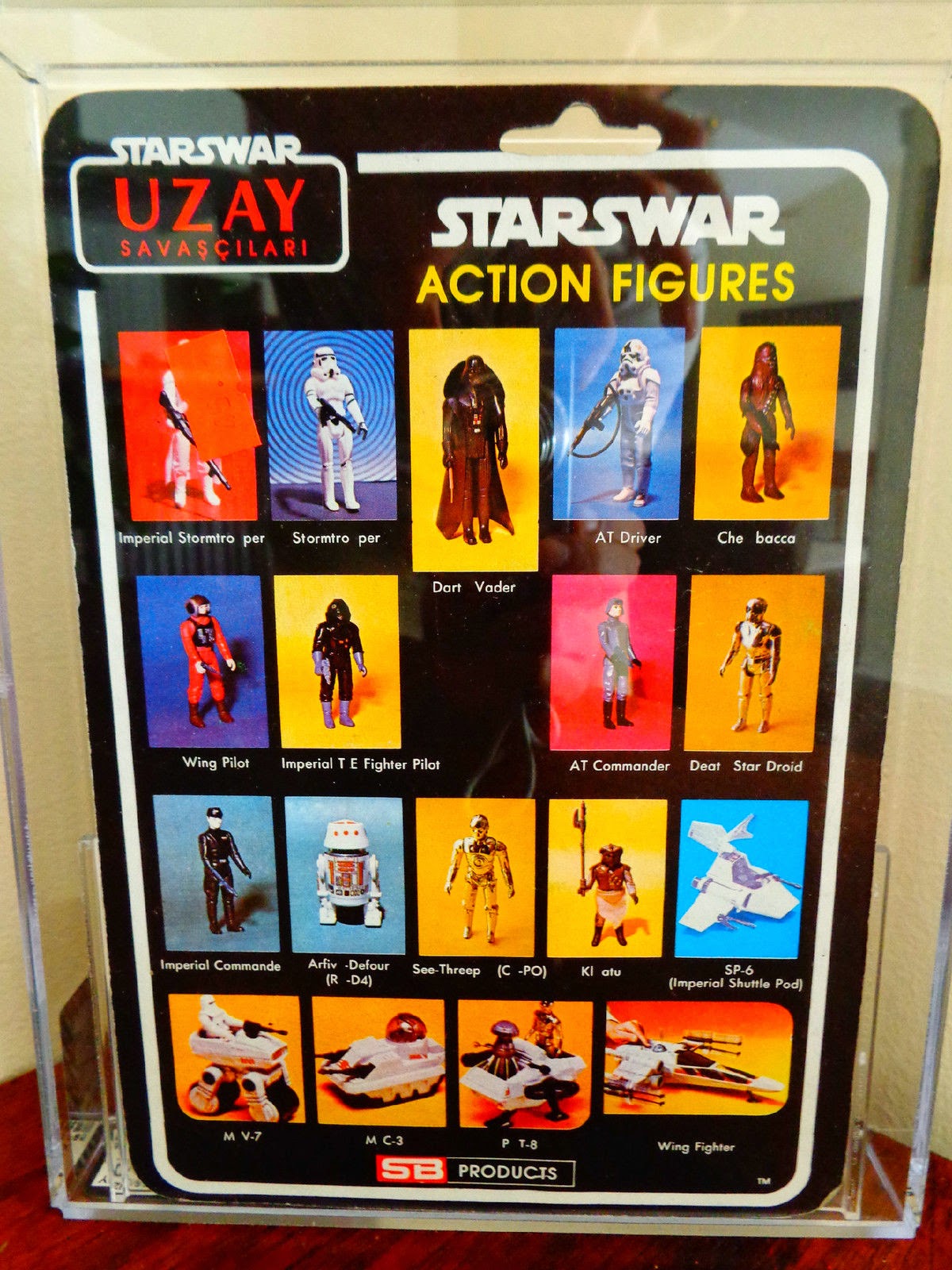 Although it’s not as complicated as the control panel for the Death Star, a 1980s HP calculator is still an impressive piece of technology for its time. And the folks at Uzay used it to make one of the most confusing and comical cardbacks in the history of Toy collecting. The Uzay version of the Imperial Gunner is a great piece MOC if you can find one and here we have a fairly good condition item (For an Uzay MOC). Like the Blue Star this did very well, if not better considering that it is not as sought after as the prior auction. Condition is more than likely the primary reason, making this another successful sale for the eBayer. 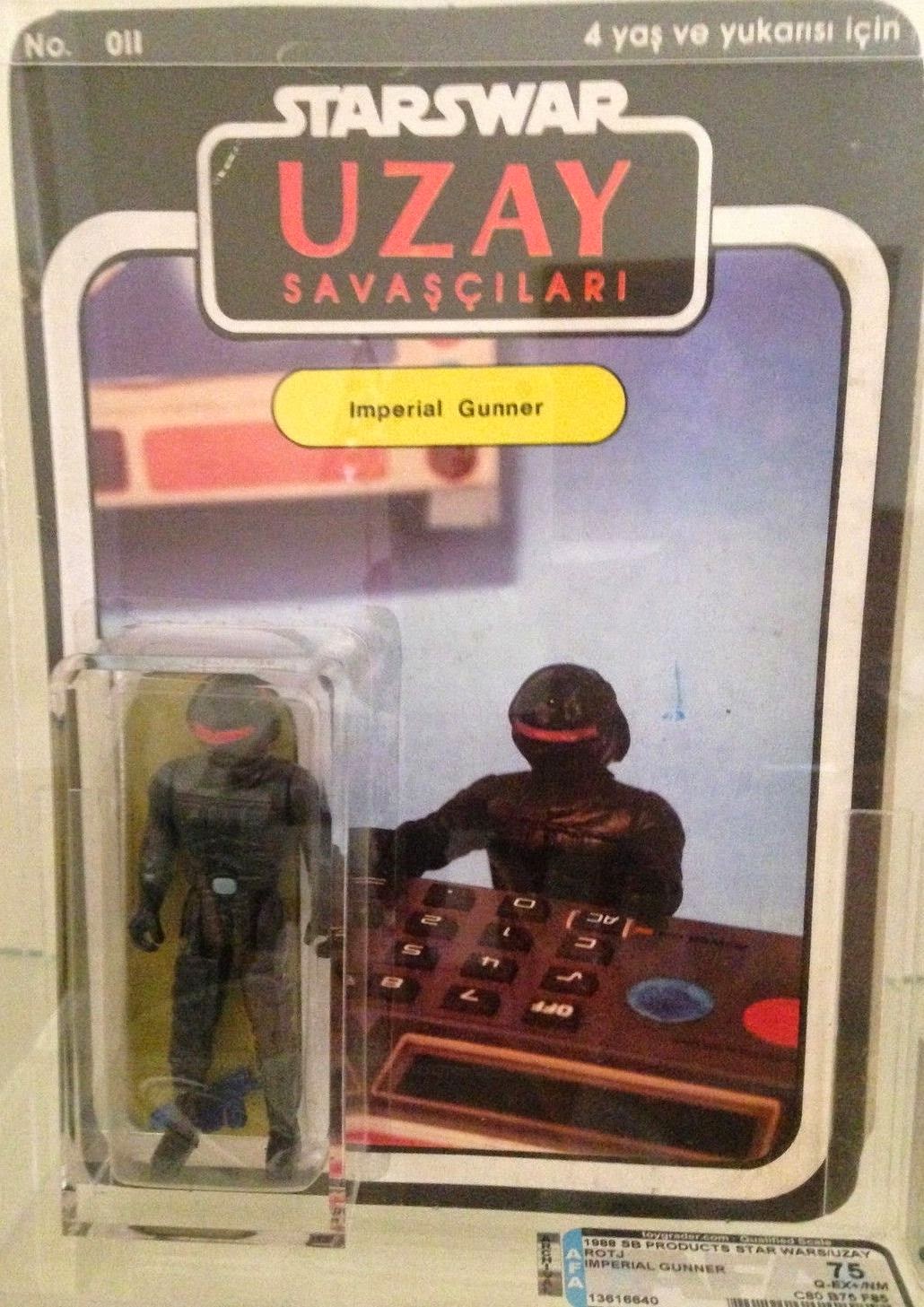 Lastly in our Trio is the Darth Vader Uzay MOC, a sort of psychedelic take on the cardback, making one wonder if this makes people in Eastern Asia break out is seizures if placed on a turntable. Also in great condition (for an Uzay MOC, that’s three disclaimers), this piece saw a great return for the seller with a $4,000 price tag -- inline for a very rare Vader, as there tend to be more Vader focus collectors in the hobby than any other character, and this would be a great addition for anyone looking to put the cherry on top of their collection. 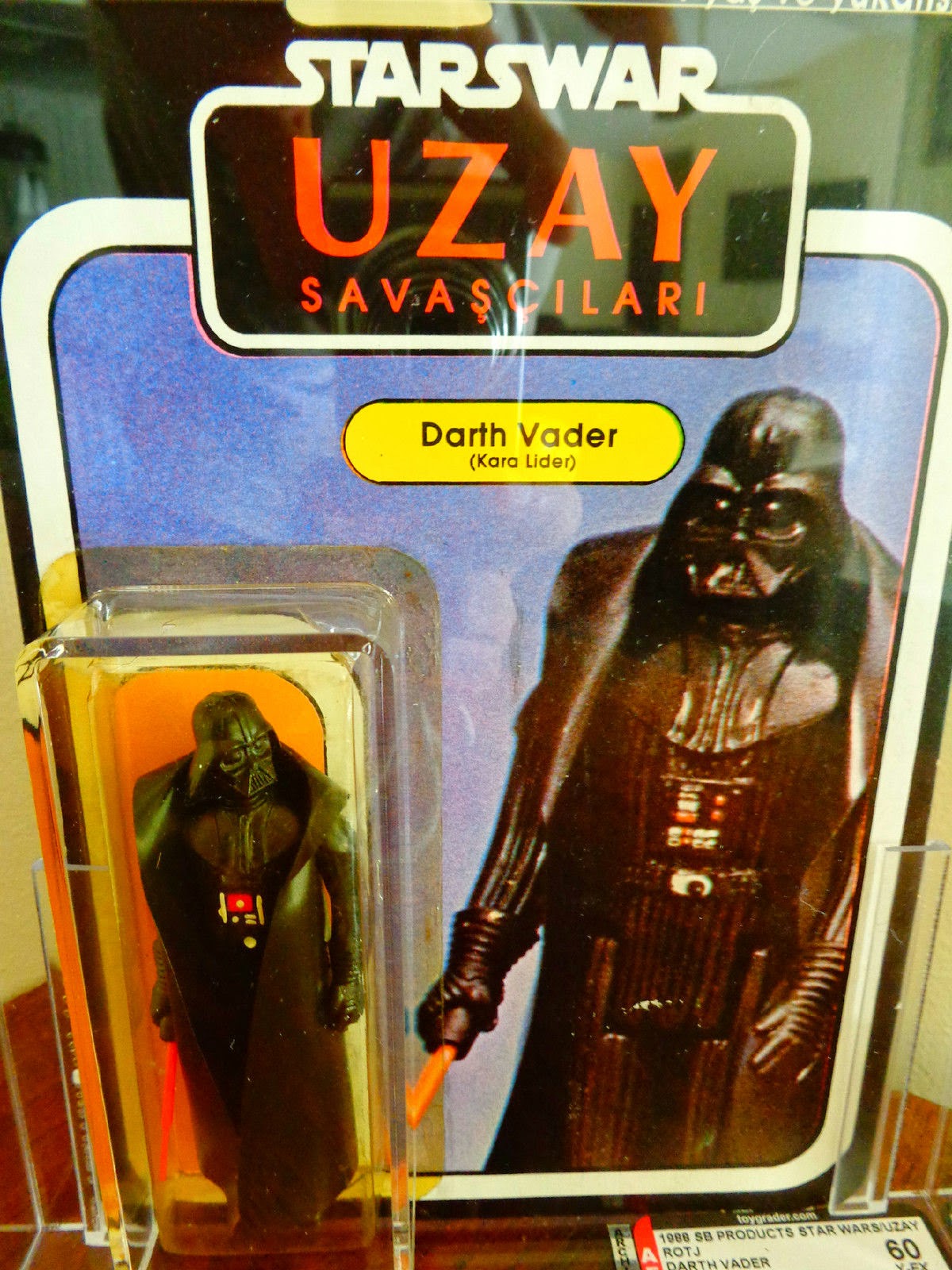 So what do you get when you sell the best graded example of the largest vehicle in the original series? Around $3,000. Our next item is none other than the Imperial Shuttle, one of the biggest items in the original toy line and the largest of any vehicle. Like a lot of the items released in the ROTJ series, this piece just simply doesn’t get the love that it deserves. It’s large, impressive, has great detail, and is simply the king of the vehicles, taller than an AT-AT, more prestigious then that old Correllian Falcon; it’s the Empire at their best, and only the best get to travel in it, guys like Vader, Dignitaries, and of course the Emperor. This puppy clocked in at a huge price increase as most 85s see an auction price of $1,200-1,400 consistently. But as many have said when you want the best of the best you have to pay for it, and someone dropped over double the going rate for an 85 with this one going for over $3K. That’s a lot to pay for a 5 point grade increase, and I don’t think it’s justified. However when you are talking about something this big that 5 point difference can at times be noticeable in condition, as it is the best of the best, the only one to get a 90 and I’m sure whomever bought it was waiting for it to come around. 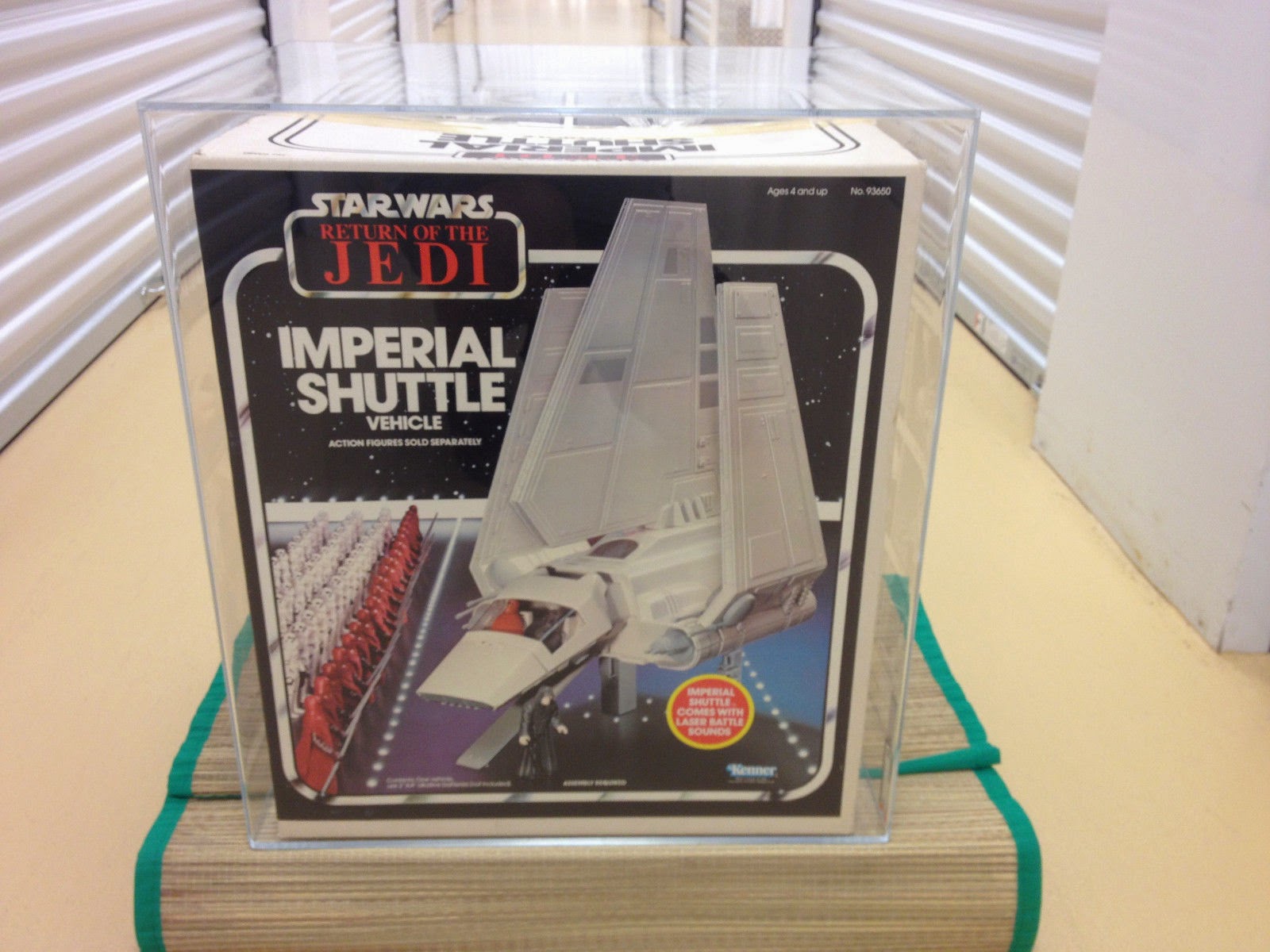 As prefaced by Jordan (Creeptastic) Hembrough himself, there’s a big difference between the Creature Cantina Playset and the Cantina Adventure Set. One of the few exclusive sets done for Sears in the Star Wars line, it’s also one of simplest items they ever produced: a few pieces of cardboard and four figures.   Simplicity sometimes creates some of the best collectibles, as this piece is dollar for dollar one of the most expensive items in the production line up. Not many boxed examples made it around until today as the box itself is rather thin and tall, not great in terms of structure. Here we have a graded example with a solid grade of AFA80 and a price of $5,500ish as the item ended with an offer vs. in auction style. 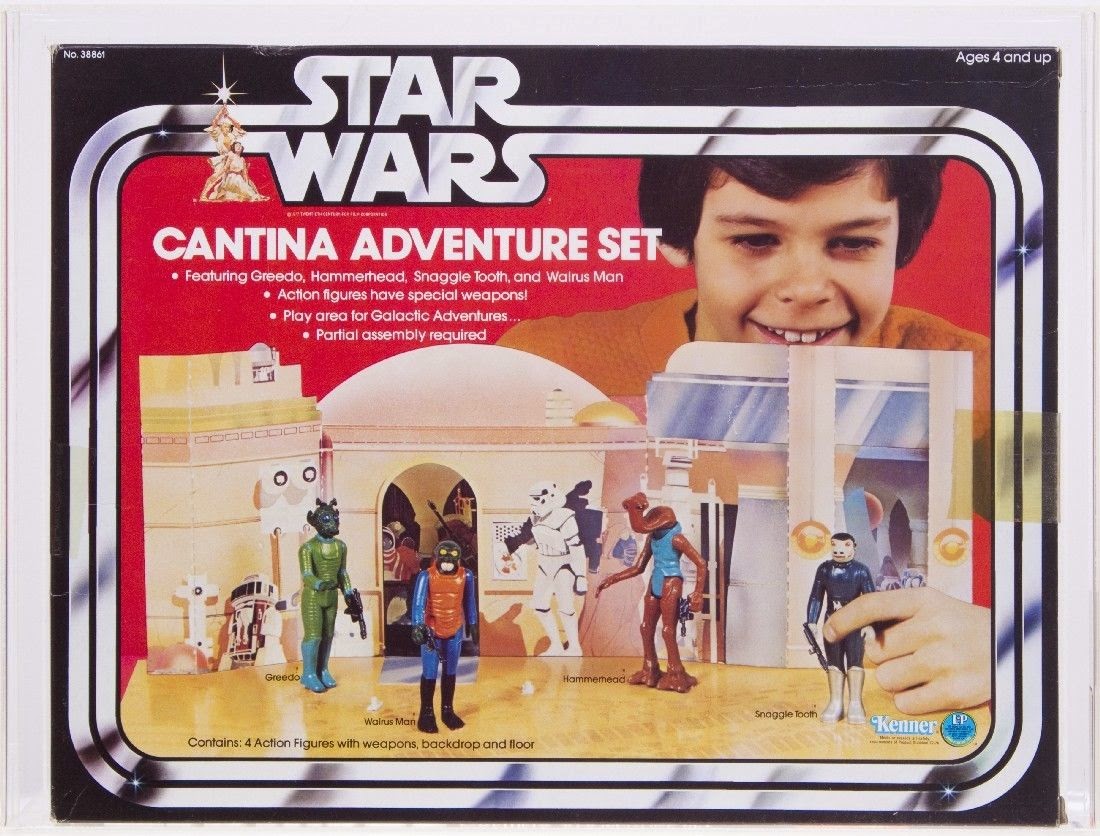 This month I wanted to pause on our continuing updates around collections of the first 21 and first 12. As many of you know I was more than mildly taken aback by the on air transaction for 15 MOC figures from the first movie series. To say the least I thought it was more of a black eye for our hobby then a high spot. Some D-Bag on showing off his boat and then dropping $25K for figures that he could have gotten for half the price, do you think he’s trying to compensate for something…just a thought. But as I’ve heard time and time again, a fool and his money quickly part ways. And thus they completed a transaction for the first 12 MOC with Hammerhead, Walrusman and Greedo in tow.

As we’ve seen several times since, buying a set of AFA graded 12 back should run you about $10K, and a set of the first 21 will be about $15K. In this case we’re not too far off the mark given the condition of the figures and grades assigned. A very nice set and instant collection for someone who just wants the original figures. 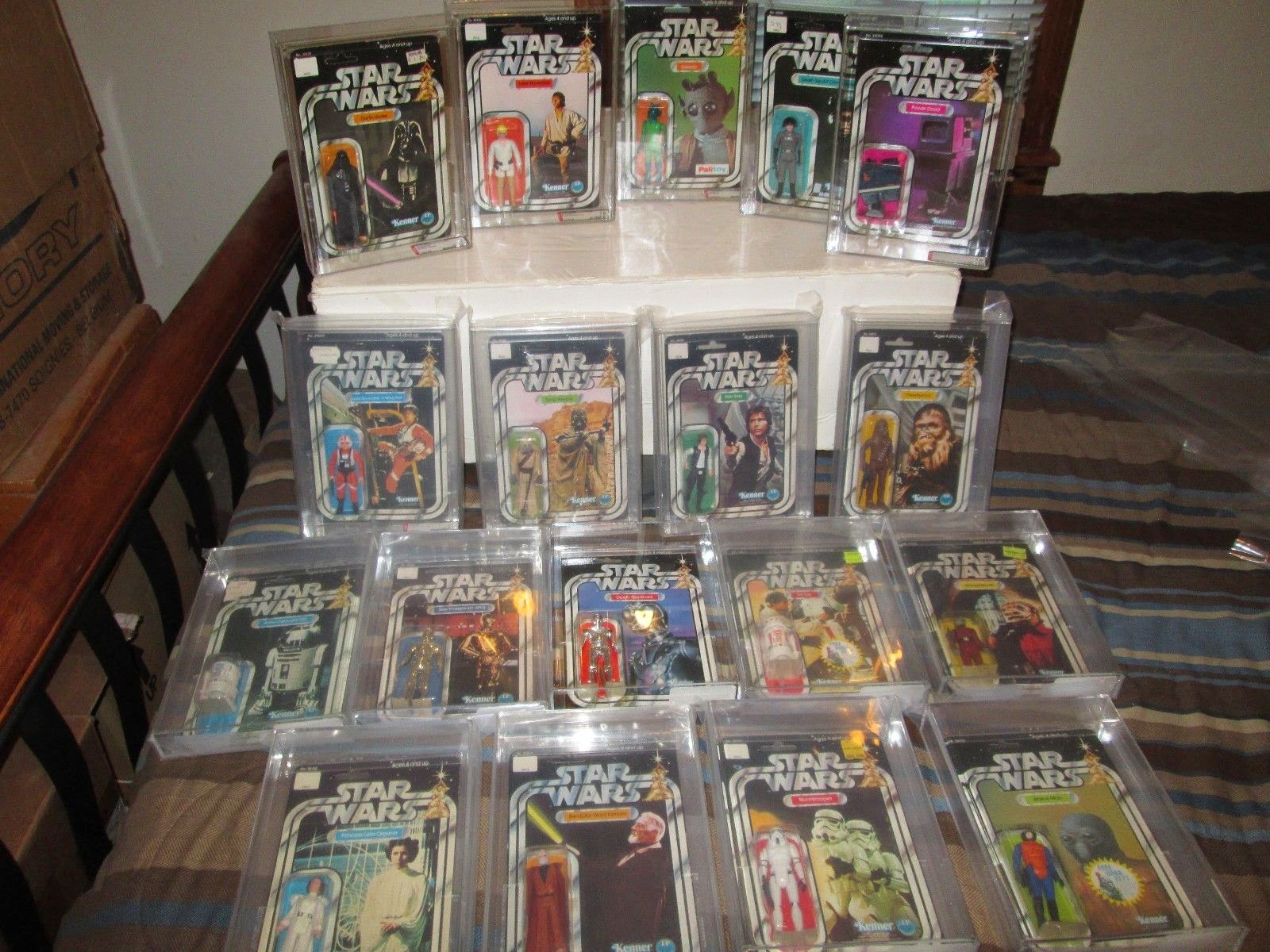 Well that sums up our General Update for the month of November, hope you enjoyed this one and keep up to date on what’s going on in the hobby via www.theSWCA.com, with new blogs, articles and everything else vintage related.